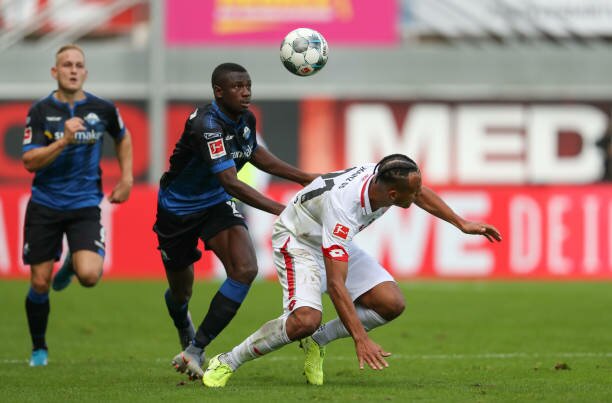 05 October 2019, North Rhine-Westphalia, Paderborn: Soccer: Bundesliga, SC Paderborn 07 - 1st FSV Mainz 05, 7th matchday in the Benteler Arena. Paderborn's Jamilu Collins (M) in the fight for the ball with Karim Onisiwo (r) from Mainz. Photo: Friso Gentsch/dpa - IMPORTANT NOTE: In accordance with the requirements of the DFL Deutsche Fußball Liga or the DFB Deutscher Fußball-Bund, it is prohibited to use or have used photographs taken in the stadium and/or the match in the form of sequence images and/or video-like photo sequences. (Photo by Friso Gentsch/picture alliance via Getty Images)

Collins was guilty of giving away a penalty in his side’s 2-1 loss on Saturday, then lost the chance to redeem his image by missing a spot kick towards the end, all of which the right-back admitted he deeply regrets and is now seeking ways to make amends in the next game.

The 25-year-old Collins, who scored in a 3-2 loss against Bayern Munich the previous weekend in the German Bundesliga, has been a standout performer for the newly-promoted outfit this season, but he this time out had an unforgettable afternoon, as his missed penalty cost them a point at home and Paderborn suffered their sixth defeat of the campaign.

Ironically, before missing a the other end, Collins was also at fault for the penalty that put Mainz 2-1 up in the first half and, when he was presented with the opportunity to redeem himself, the left-back saw his effort saved by the goalkeeper to hand the visitors the win.

The former HNK Rijeka of Croatia defender will now turn his attention to Nigeria’s upcoming friendly against Brazil in Singapore, where he hopes to get his 13th senior cap, after which he pledged to redeem his image at Paderborn and make it up to their fans.

Collins told AOIFootball.com: “It’s unfortunate with the result of the match yesterday. I felt we played well and did not deserve to lose. The penalty miss was painful but it’s part of the game and I hope to bounce back from it.”