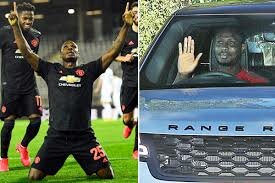 Although he did not enjoy a fair run in the second half of his elongated loan deal from Shanghai Greenland Shenhua of China, Ighalo is not leaving Old Trafford with bitterness, as he thanked everyone at the club for giving him the opportunity to play for his dream team and vowed to remain loyal to them till the end of time.

Ighalo stated as much during what could be his last official comments as a Man United player, considering that his loan spell from loan from Shenhua expires at the end of this month.

The 31-year-old hitman, who scored five goals in 23 appearances for United during the first half of his stay, which began in February last year, is already subject of interest from clubs in Qatar, Saudi Arabia and Turkey, though he is due to return to parent club Shanghai Shenhua.

His contract at Shenhua runs until December 31, but the Shnghai-based Chinese Super League side are ready to listen to offers for Ighalo with clubs in Qatar, Saudi Arabia and Turkey all interested in the former Lyn Oslo of Norway, Udinese of Italy, Granada of Spain, Watford of England and Changchun Yatai of China star.

Ighalo scored five goals in 23 appearances across all competitions for United after arriving on Deadline Day last January, but has made only two starts this season since Edinson Cavani joined in October.

The soft-spoken star, who scored four goals in his first three starts for United, over a period of one month at the start of the second half of last season, added that he remains hopeful the club can win the EPL and FA Cup double under Ole Gunnar Solskjaer in the current campaign.

The 2019 Africa Cup of Nations top scorer, who supported United as a kid gorwing up in Ajegunle area of Lagos, has played just nine minutes this season, but he insists that staring for The Red Devils was an honour he will forever cherish and be grateful for.

Ighalo stated on social media: “It’s so hard to see this dream come to an end. To the manager, I say thank you for trusting and believing in me when many did not.

“But I give God the glory for helping me fulfill this lifelong dream of putting on a Manchester United shirt as a player and represent this great club.”