Victor Osimhen Set To Miss Yet Another Italian Serie A Fixture 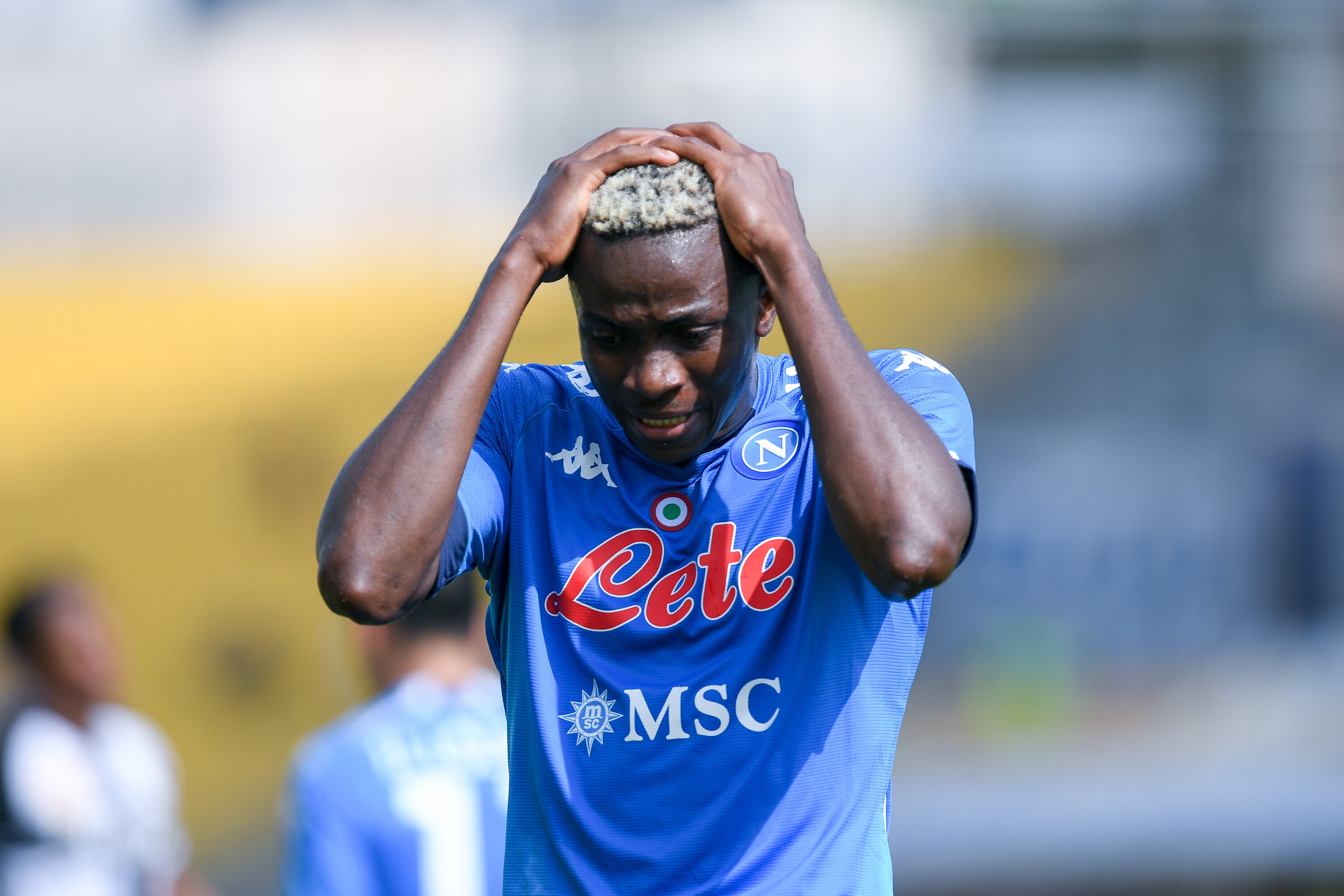 Victor Osimhen of SSC Napoli looks dejected during the Serie A match between Parma Calcio 1913 and Napoli at Stadio Ennio Tardini, Parma, Italy on 20 September 2020. (Photo by Giuseppe Maffia/NurPhoto via Getty Images)

SSC Napoli of Italy striker, Victor Osimhen is set to miss yet another mach in the Italian Serie A, as he is yet to fully recover from a head injury he suffered two weekends ago, megasportsarena.com reports.

With the former VfL Wolfsburg of Germany, Sporting Charleroi of Belgium and Lille Metropole of France sensation still on the mend after escaping death from a tumbling fall against Atalanta, he has been left out of Napoli’s trip to Sassuolo.

This means Osimhen is sure to miss the game at Città del Tricolore in Reggio nell’Emilia, ahead of which Italian publication, La Repubblica via Football Italia disclosed that the hitman did not travel with the squad to Mapei Stadium.

However, while the report noted that Osimhen was still battling to fully recover from the head injury he suffered towards the end of his side’s 4-2 loss away to La Dea, he partially trained on Saturday, with a personalised programme in the gym and on the pitch.

A report by Corriere del Mezzogiorno revealed that, while Osimhen is working individually as the series of checks he had after the head injury in Bergamo found some anomalies in his health levels, such that the game against The Black and Greens has come too soon for him.

Consequently, Napoli’s coach, Gennaro Gattuso opted to exclude the 22-year-old striker from the trip to Reggio Emilia, with feelers indicating that he will train separately up till this Friday without heading a ball, after which he will be tested again to see whether he will be fit for the weekend clash with Bologna.

Osimhen has already missed more than half of the matches played by Napoli this season and, in 16 matches across all competitions, he has scored only twice while logging 984 minutes, thereby belying his value when he joined La Partenopei as their most expensive transfer ever and costliest Nigerian player in history.

Osimhen, though, is heading for another long spell out, just after getting back from a shoulder injury he copped on international duty in November and infection with coronavirus soon after, as he was not even involved in Napoli’s final training session ahead of their next game, and the club’s website gave no mention about him undergoing any personal drills.

The club statement read in part: “Andrea Petagna had physio and did personalised work in the gym. Hirving Lozano had physio and worked separately on the pitch.. Kostas Manolas trained partially with the main group and partially on his own.”