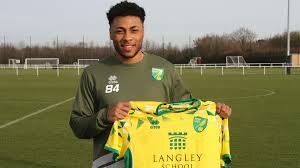 New signing at Norwich City of England, Akin Famewo has disclosed that he is adapting fast to life with The Canaries, but admits he is facing a different kind of challenge in the English Premier League, having only arrived from lower division side, Luton Town in January, megasportsarena.com reports.

While Norwich’s boss, Daniel Farke said he was delighted seeing the Nigerian-born central defender sign a new three-and-a-half-year contract, Famewo, who first joined the club’s academy, said he is excited with the step-up he is taking in his career.

Born in Lewisham, Greater London on November 9, 1998, Akinlolu Richard Olamide Famewo joined Luton as an under-10 and progressed through the club’s youth system, through which he was a member of the under-18 team that won the Youth Alliance South East title and the Youth Alliance Cup in 2016, then reached the FA Youth Cup quarter-finals.

Famewo signed his first professional contract on 18 July 2016 at the start of the second year of his scholarship, and was named in the matchday squad for the first time on 10 August for Luton’s 3–1 win at home to Aston Villa in the EFL Cup first round, but remained an unused substitute.

The youngster, who made his professional debut on 16 August as an 86th-minute substitute for Jordan Cook in a 2–1 win at home to Newport County, became the captain of Norwich’s under-23 team for the current season, and is equally happy with the opportunities he has already gained to be in Farke’s first-team setup for a couple of training sessions and matchday squads.

Famewo told canaries.co.uk: “It’s hard to describe how I’m feeling right now because there’s a lot of excitement and good vibes. It’s been a big step up to working with the first-team because the intensity of the Premier League is a lot faster and stronger, but I I’m learning and adapting to it.”

Farke added: “I’m delighted for Akin. He’s developed a lot over the last period and his new deal is well deserved. Akin has recently stepped up to first team training and has adapted very well. We know he still needs time to develop, but he is very much on the right track. He’s a good person and has a good presence and energy around him.”