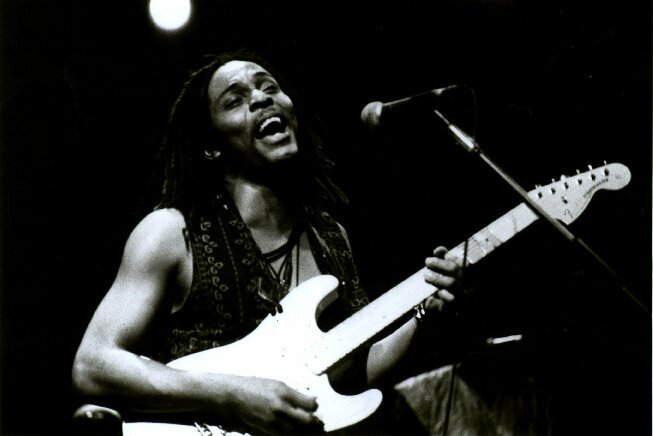 Super Eagles’ former media officer, Ben Alaiya and several sports writers have joined the large array of Nigerians from all walks of life that are mourning the death of reggae music icon, Majek Fashek, which sad event took place in the early hours of Tuesday, megasportsarena.com reports.

Reacting in the wake of the announcement of the passing of the ‘Send Down The Rain’ legend, whose real name is Majekodunmi Fasheke, Alaiya recalled how the late music maestro touched him with several hit songs while he was a student in the university.

Dramatically, Alaiya (aka Alastick) hails from Edo State, where Majek, whose father was from Osun State, grew up in the capital, Benin City, with his mother, who is an indigene of the state that is popular for its cultural and traditional inclinations, and provided the setting for the late musician’s grooming process with a reggae group known as Ja-Stix.

Alaiya was joined in mourning Majek by two other media officers and other sports editors, as the former spokesman of Nigerian Professional Football League (NPFL) side, Heartland of Owerri, Cajetan Nkwopara also chipped in a word for the late multi-talented ace guitarist, percussionist and vocalist.

Their views were part of comments that trailed an opening post by former press officer of the sports ministry, Patrick Omorodion, who launched the rain eulogies with a piercing poser about the memories that have been left behind by Majek, who passed to the great beyond in New York City, USA, after battling a mysterious illness for several years.

As if on cue, Majek’s death, aged 57, said to have come after complications caused by cancer, coincided with two days of torrential rain in Lagos and other parts of Southern Nigeria, which many music fans acknowledged as a symbolic send forth setting for ‘The Rain Maker,’ whose long standing manager, Omenka Uzoma declared should be celebrated in death, not mourned.

Sadly, the last few years of his life were replete with multiple allegations of drug abuse, spiritual struggles and dementia, most of which he debunked, while rumours of his death spread last year, but it was later confirmed that he was receiving treatment at a rehabilitation centre on the outskirts of Abuja.

In September, Majek’s aides sought financial help from the public in footing his medical bills, to which Lagos oil magnate and businessman, Femi Otedola joined in lending a hand, after which the icon was treated at a hospital in London for several months.

He was then moved to the United States in January, as doctors advised he should be closer to his family of four children and ex-wife, Rita, who were all at his side when he gave up the ghost and gave the last breath, much to the consternation of his fans and an array of top sports writers.

Omorodion set the ball rolling, as he posted in the opening comment on Facebook, noting: “The death of Majek Fashek, the ‘Send down the rain’ crooner has opened the heavens this morning. Raining cats and dogs in my area of Lagos this morning. Sad news. Majek Fashek finally bows to death. May God rest his soul.”

Nkwopara stated: “Waiting for the rain to fall and water all. Yeah;” while Alaiya, who is now CEO/Editor-in-Chief of SportsDay newspaper, interjected by pointing out: “My best song of his is “I come from the ghetto, no one knows, only God knows tomorrow”, great guy. Only the late Lucky Dube can compare to him after their grandfather, Robert Nesta Marley. God keep the soul of our icon, Amen.”