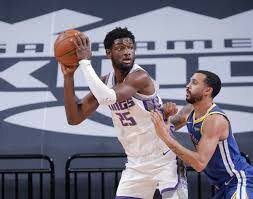 Sacramento Kings of America star, Chimezie Metu hit the spotlight with a last basket of the period, but his effort could not save his side from losing to Denver Nuggets in USA’s National Basketball Association (NBA).

The Nigerian national team, D’Tigers’ ace was on top of his game, even as Nikola Jokic had a stellar 38-point, 18-rebound performance, and the visiting Nuggets recorded a 106-100 victory over The Kings on Wednesday night.

Megasportsarena.com reports that it was NBA league-leader Jokic’s 19th straight double-double performance, his first this season, with at least 38 points and 18 rebounds, while also chipping in a team-high seven assists.

In winning, Denver took advantage of the suspension of Sacramento standout Domantas Sabonis, who was suspended for a game after he was cited for charging aggressively at an official during an ejection in Monday’s home loss to New York Knicks.

Monte Morris saved seven of his 20 points for the final five and a half minutes, helping the Nuggets sweep the season series from Sacramento for the second time in the last four years.

A Davion Mitchell three-pointer had given Sacramento a 90-89 edge with just over six minutes to play, and a dunk from De’Aaron Fox, who had a team high 32 points, put them back on top 92-91 little more than a minute later.

Austin Rivers’ three-point shot soon after gave The Nuggets back their lead, one which they never again relinquished, as they coasted all the way to victory over Metu’s side.