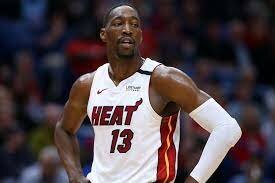 Miami Heat of America top performer, Bam Adebayo was caged for the better part of his team’s game and they eventually lost to Phoenix Suns in USA’s National Basketball Association (NBA), megasportsarena.com reports.

Adebayo eventually managed an ineffective 17 points on the night, as Devin Booker returned from a four-game COVID-protocol absence and had a near triple-double, helping Phoenix clinch the NBA’s first playoff spot with a 111-90 win.

Booker finished with 23 points, nine assists and eight rebounds, while Phoenix got 21 points from Mikal Bridges and 19 points and 10 rebounds from Deandre Ayton, as JaVale McGee added 11 points and a season-high 15 rebounds off the bench.

Miami, who have won 12 of their past 15 contests, were led by Duncan Robinson (22 points), Tyler Herro (17 points) and Adebayo (17 points). Kyle Lowry added five points and a game-high 10 assists.

Adebayo and his pals put up a stiff fightback, as Miami led by 11 points in the first quarter, but Phoenix went on a 15-2 run to close the period on top, 29-27.

The Suns then held that two-point advantage with a 57-55 lead a the half and, by the end of the quarter, Phoenix had stretched ahead 91-74 and The Heat never really challenged in the fourth.