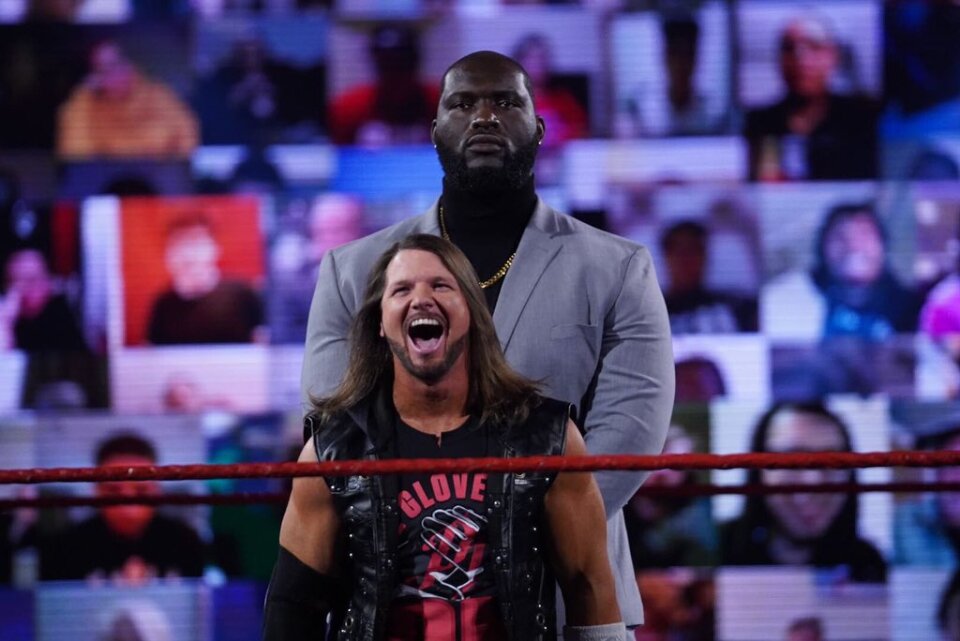 Towering Nigerian basketball-rookie-turned-wrestler, Tolulope “Jordan” Omogbehin has all of a sudden become the latest sensation in the roped square, as he got a stunning victory during his debut on World Wrestling Entertainment (WWE) annual show, WrestleMania.

Megasportsarena.com reports that it came when Lagos-born Omogbehin stepped out as a tag team partner with AJ Style, and the former college basketball player, who signed for WWE’s ‘Raw’ under the ring name ‘Omos,’ made history as the tallest fighter ever in the ring.

He and his partner defeated ‘The New Day’ in an impressive debut by Omos, who was earlier showcased as the monster that had been waiting anxiously to explode throughout the pandemic until he finally got the chance to step into the spotlight alongside the more popular AJ Styles.

Debuting alongside the all-time great turned out to be a remarkable start for his career in WWE, on the opening night of WrestleMania 37, and Omos did nothing to dispel his unreal potential and ended the outing as WWE Raw tag team champion.

Omos figures to be a dominant force as his pairing alongside Styles shows tremendous promise, with pundits and fans alike all already talking about the Mauve Giant with a staggering seven-foot presence that could potentially stimulate interest into a vibrant followership.

AJ Styles, one of the greatest in-ring performers of his generation, was a smart choice to put with the greenhorn, who stayed out for most of the first half of the contest that was dominated by New Day, who were intent on preventing a tag change for the gargantuan Omos.

Eventually, when Xavier Woods went to the top rope, it gave Styles just enough time to scurry across the ring and tag in the highly exuberant ‘NXT export,’ and Omos proceeded to decimate arguably one of the best tag teams of their generation.

He was impervious to pain and chopped down the New Day with ease, landed a couple of nasty backbreakers on each man before helping Styles land a Phenomenal Foreman from his huge shoulders.

A two-handed chokeslam was the end for Kofi Kingston and Omos collected the 1-2-3, earning a WWE championship in his debut match, while Styles became the first-ever grand-slam champion in both WWE and TNA/IMPACT.

What a fairy tale story for a giant that played basketball for University of South Florida and Morgan State University in a college career that ran from 2012 to 2015, but he never emerged through the penumbra until he signed with WWE in October 2018.

Born in Lagos back in 1994, the one fondly called ‘Big Jordan’ and ‘Big Ninja,’ with a billed height of 7 ft 3 in (2.21 m) and weight of 400 lb (180 kg), migrated as a kid with his family to the United States, where he attended and graduated from Atlantic Shores Christian School in Chesapeake, Virginia.

All through high school, he played basketball and continued in the slam-dunk sport after opting to attend University of South Florida (USF), where he played at the center position and met Nigerian basketball legend, Hakeem ‘The Dream’ Olajuwon during The Bulls’ trip to Houston, Texas in 2014.

Omogbehin also played basketball at Morgan State University in Baltimore, Maryland, where he played center from 2014 to 2015 and, after fading from the limelight for almost three years, it was reported on October 17, 2018 that he had switched to wrestling.

The breakthrough came when WWE signed Omogbehin with six other athletes to train at their performance center and he made his in-ring debut the following year, during a July 18, 2019 house show in which he defeated team 3.0 in a Two-On-One Handicap match.

During the 2021 Royal Rumble, Omos involved himself by preventing AJ Styles from elimination on a few occasions and then himself eliminated Big E and Rey Mysterio despite not being in the match-up.

He would also go on to help Styles enter the Elimination Chamber early before being ejected by WWE official, Adam Pearce and Omos then announced during the March 15, 2021 episode of Raw that he would be making his in-ring debut at WrestleMania 37 alongside Styles.

That eventually happened this past Saturday, when he paired Style against The New Day for the Raw Tag Team Championship … and the fairy tale continues to transform into a story fit for the movies.