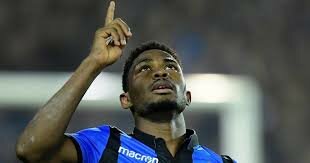 Club Brugge of Belgium striker, Emmanuel Dennis Bonaventure could be the next Nigerian top player to sign for a club in the English Premier League, as information in Queensland indicates that Sheffield United are keen on snatching him this summer, megasportsarena.com gathered.

The report out of England further reveals that The Blades are showing such fervid interest in the one-cap Super Eagles’ rookie, to the extent that he is now said to be moving closer to quitting Club Brugge, as the EPL giant-killers have even contacted the team’s top shots officially.

It was learned further that Bonaventure is rated high among Sheffield’s their top targets and the Belgian champions will now aim to cash in on the attacker’s amazing form of the recently cancelled season for them to hook a good bargain deal for him in the coming month.

However, it is left to be seen whether they will get as much as 25 million Euros for the former Olympic Eagles’ invitee, who last week returned from holidays in Cannes, France, to join his pals at the Brugge-based team’s training camp.

That comes at a point feelers are already indicating that the club’s Belgium Cup final clash with Royal Antwerp in August could be his last game for Club Brugge, as he has for several months been high on the list of desired acquisitions by Sheffield, whose coach, Chris Wilder confirmed that he has made contact with some of his transfer targets.

Wilder told Yorkshire Live: “We definitely made 100% contact. Last week I had a board meeting where I communicated my wishes to move the club forward. I made my recommendations, but that has obviously been influenced by the current situation where the club is losing money.”