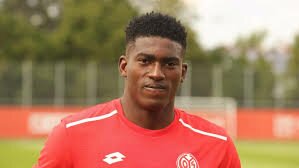 SV Mainz 05 of Germany striker, Taiwo Awoniyi has shot his mind back to his days at Royal Mouscron of Belgium, where he admits he had the best moments of his career so far, and hopes to achieve of better days at his present base, megasportsarena.com reports.

With the UAE 2013 FIFA U-17 World Cup gold medalist having got his first goal in the German Bundesliga and four straight starting spots since the restart of action after the coronavirus break, Awoniyi is now enjoying a rare chain of bliss at Mainz, and he hopes that he will now have better days than he enjoyed with Mouscron.

Incidentally he had two stints at Mouscron, as his first spell was a roller-coaster of goals and regular playing time on loan from Liverpool of England, who then sent him to another Belgian club, KAA Gent, the following season, but he found it tough and quickly returned to Mouscron to complete the campaign.

It was from Mouscron that he then moved to Mainz last summer, and Awoniyi believes the excellent run he was able to enact at the modest Belgian club helped him improve his game and is now rubbing off on him back in Germany, where he previously played in the lower division at the outset of his career abroad with FSV Frankfurt, also on loan from Liverpool.

Although many of his fans were surprised to the see the former under-23 national team, Olympic Eagles’ star accept to join Mainz, Awoniyi posited that he needed to move on from Belgium after two consecutive seasons, especially as he finally wants to convince top shots at Liverpool that he is good enough for their main team.

Ironically, he has not played a single game for The Reds since joining in 2015, with his aspirations at Anfield curtailed mostly due to his work-permit ineligibility, and the Merseyside outfit have sent him sent out on loan to Frankfurt, NEC of Holland as well as Mouscron and Gent.

The 22-year-old soft-spoken lad’s spell at Gent was not as prolific, as he scored only three goals in 21 outings and the loan was cut short in January 2019, unlike what he enjoyed the year before at Mouscron, and it was at Les Hurlus that he was able to establish himself with ten goals in his first spell with the club, then returned to bag 11 goals in 16 appearances.

It was a surprise to many observers that he eventually left Belgium after his successful time in the Jupiler League, but the exuberant lad, who joined Mainz on loan last summer, says it was a decision made between himself and Liverpool to take another step forward in his young career.

Awoniyi told Tribalfootball.com: “Of course I played more games and got the chance I deserved. I had a great time in Mouscron. Football is about your presence being felt and making good use of the chances that comes your way and I think I had both while at Mouscron last season.

“I had two years in Belgium which were great seasons for me and there are lots of reasons why I chose to leave, but Mouscron will always be a club that I respect a lot. Leaving for me had always been the plan between me, Liverpool and my agent to fulfill my goals and targets, as I continue to develop my football.”