Super Eagles Land In Maseru, Ready To Feast On Crocodiles 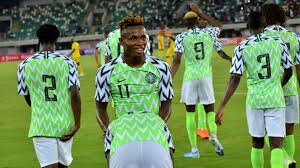 Nigeria’s Super Eagles have landed in the capital of Lesotho, Maseru for Sunday’s 2021 Africa Cup of Nations qualifying match against that country’s senior team, known as Crocodiles.

The Crocodiles themselves have just returned from Freetown, where they earned an inspiring point in a 1-1 draw with the Leone Stars on Day 1 of the campaign on Wednesday.

On the same day, the Super Eagles edged Benin Republic 2-1 in an intense encounter at the Godswill Akpabio Stadium, Uyo to go top of the qualifying pool. France –based duo of Victor Osimhen (from the spot) and Samuel Kalu (angled low drive) secured the win for Nigeria after the Squirrels had taken a second minute lead through Stephane Sessegnon.

The chartered Max Air aircraft that flew the delegation had a stop-over in Angola but safely arrived in Maseru on Saturday afternoon, and players and officials were immediately ferried to their Avani Lesotho hotel.

Nigeria were scheduled to have the official training at the match venue – Maseru-Setsoto Stadium – at 7pm Lesotho time (6pm in Nigeria) on Saturday.

Sunday’s encounter will kick off at 6pm Lesotho time (5pm in Nigeria), and it is exactly one year to the day that the Super Eagles secured a 1-1 draw with South Africa’s Bafana Bafana in Johannesburg to grab a ticket to this year’s Africa Cup of Nations finals in Egypt, where they finished third and with the bronze medals.

Team doctor Ibrahim Gyaran confirmed to thenff.com that there are no injuries within the 23 –man playing body.

Johannes Jakob Vries from Namibia will serve as match commissioner while South African Carlos Henriques will be referee assessor.