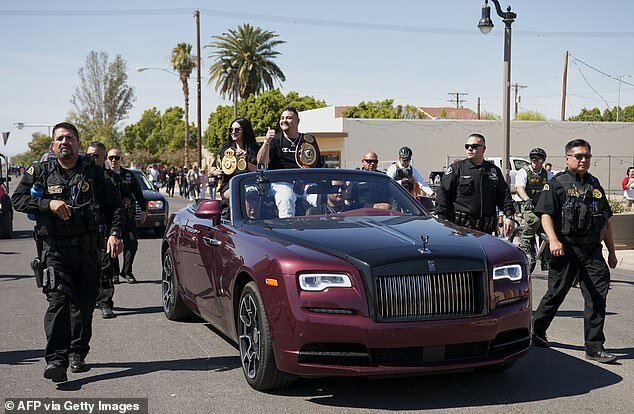 While Joshua’s fans and fight critics would slam Ruiz for being overweight, a ‘fatso’ who defied all odds to floor the rock-solid body-building ‘AJ’ on June 1st in Madison Square Garden, USA, the man of the moment says he is enjoying every moment of the attendant fortune.

Interestingly just few minutes after pulling off the unthinkable in The Big Apple, Ruiz shouted from inside the roped square, excitedly pumping at his mother, Senora Ruiz, who smiled with delight as she waved back from ringside, as the new champ declared: “Mum, we don’t have to struggle anymore.”

Ruiz had dramatically earned his first five million dollars and earned his fans, friends, followers and family members $10,000 each by backing him to beat Joshua, despite him be the undercard on odds at 11-1, but he is now rated in favourable terms heading into this Saturday’s rematch in Saudi Arabia.

Since then, it has been a roller-coaster ride on the wings of fortunes for the first world boxing heavyweight champion of Mexican origin, first starting some days after June 1st, when he got for himself a white Rolls Bentley, adding to a Porsche Panamera he already had.

A report by sportsmail adds: “The 30-year-old Andy Jr’s new home includes the obligatory pool amid sparkling fountains along with tennis and basketball courts. As well as more than enough bedrooms to accommodate himself his wife and their five children in addition to any friends and family wanting to stay over.

“He has also taken to giving tours of the estate to townsfolk who drive out to see how their hero is getting along. Luxurious his accommodations may be but this is not a champion who lives in an ivory tower.

“Although his dual citizenship is enhancing his earning power it is his fellow Mexicans to whom he is promising he will ‘do everything humanly possible to keep those belts for our country’ come Saturday’s rematch with Joshua in Saudi Arabia.

“That has included improving his diet for the last three of six months since he upended Joshua four times in seven rounds. Although Ruiz still resembles that portly figure who shocked the world having been bred from boyhood on Snickers bars and such delicacies as his mother’s pollo mole, a traditional dish of roast chicken smothered in fiery chocolate.”