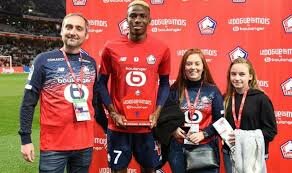 Lille Metropole of France striker, Victor Osimhen has received another hint of additional value added to his stock, following an analysis that his transfer worth has already soared beyond €12m, which was the amount with which his French Ligue 1 club bought him from Sporting Charleroi of Belgium this past summer, megasportsarena.com reports.

With Osimhen already joint-top scorer in the league, netting in all five home games for his side and voted player of the month for September, French football expert, Sirik Geffray has tagged the Super Eagles’ rookie ‘sensation of the moment’ and submitted that the lad is ready to step into a higher level of valuation and impact outside France.

In the wake of a report by Spanish sports newspaper, AS that Osimhen is in the transfer radar of Barcelona, as a likely replacement for Luis Saurez, Geffray went on to suggest that Lille could jolly well sell Osimhen for sell him for three times the amount they bought him four months ago, as his valuation is now around €48m.

Geffray told Sporza: “He is the sensation of the moment. A striker who has not yet turned 21 and did not struggle when he made the switch from Belgium to France. He is already ready for a step higher because he is already a finished article.

“The club are already rubbing their hands because if he continues like this, the clubs will stand in line for him at the end of the season. You know how English clubs are, for example. Then his price of €12m could (rise up to) three or four times.”

In reaction to the speculation, Lille’s sporting director, Luis Campos admitted that his club face a tough task to keep hold of Osimhen, whose brilliant start to his career in France saw him named Ligue 1 Player of the Month for September after two goals and two assists last month.

The 20-year-old Osimhen scored against SCO Angers and Strasbourg, then provided assists versus Stade Rennes and Strasbourg, which saw the former VfL Wolfsburg of Germany striker, who also opened his account in the UEFA Champions League against Chelsea on October 2, win 45% of the vote to place first ahead of Monaco’s Islam Slimani (37%) and Nantes’ Nicolas Pallois (18%).

Osimhen takes the Ligue 1 player of the month award over from Rennes midfielder, Eduardo Camavinga, who won the gong for August, and Campos predicted that there is more of such to come for the Super Eagles’ rookie, even as he admits Lille will find if hard to keep him next term.

Campos told RMC Sport: ”When you are a club like Lille, it is difficult to keep hold of a striker who scores goals… we’ll be under assault… if he continues like this. It is normal, in the way football currently is… Like all the players who have arrived at Lille in this project, the idea is to continue to help them to improve, for them to help the club and the team to improve in turn.”

An incredible two months for Osimhen in the colours of Lille has resulted in him netting eight goals in 11 appearances for the northern club, then scored on his full debut for Nigeria in a 2-2 friendly draw against Ukraine in September.
Osimhen, who was top scorer as Nigeria clinched a fifth FIFA U-17 World Cup title at Chile 2015, with 10 goals that saw him win the Golden Boot and Silver Ball as well as become the Cadet Mundial’s biggest goal getter ever, confessed that he never dreamt of winning the Ligue 1 gong.

He told BBC Sport: “It’s been an amazing time at this club and to get this award is surreal. I’m grateful to those who voted, thankful to my teammates, our backroom staff and the entire Lille fans for the love. I never expected this to happen so soon but I guess this is what comes when you are surrounded by great players, loved ones and the blessings of God.”