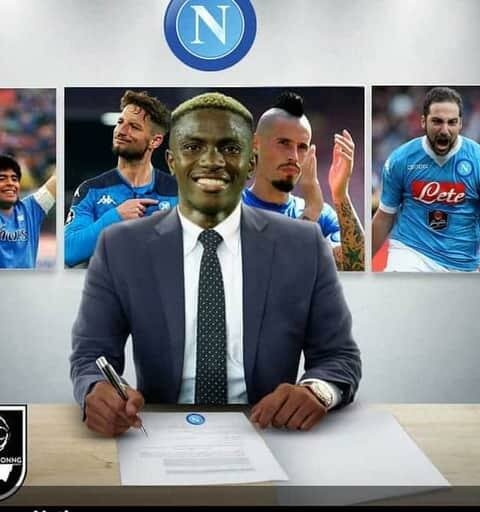 The last has not been heard about the protracted summer transfer deal that eventually took Super Eagles’ youngster, Victor Osimhen from Lille Metropole of France to SSC Napoli of Italy, as the agent who started the process of discussions for him has vowed to drag the player to court, megasportsarena.com gathered.

The agent in question, Jean-Gerard Benoit Czajka alleged that he has been short-changed and dumped by Osimhen, who he pointed out has been his client since he was 14 and got his first European deal at VfL Wolfsburg of Germany, as well as with Sporting Charleroi of Belgium and then Lille, only for him to be sacked by the player during negotiations for the transfer to Napoli.

Czajka is now blowing hot with fury and hurt, as he reeled out every reason why he should have been retained to discuss the Napoli deal to fruition and he has now finalized what he believes is a credible and winnable plans to drag Osimhen to court, along with Napoli and Lille for leaving him out of what should have been his share of proceeds from the deal.

He is equally claiming a compensation fee of five million Euro for the work he did in the early stage of the deal that eventually saw Osimhen sign for Napoli after several controversial delays and postponements, as the agent insists he cannot be held accountable for any shortcomings on his part, but hinted that the player and officials of both clubs connived to scheme him out.

The aggrieved agent went on to spill details of what he described as a dirty plot by Osimhen, Lille and Napoli, even as he declared in a very lengthy interview with France Football why he believes he will win the case in court and provided further insight about the protracted transfer.

Czajka stated at length: “I signed my first mandate with him and his father, I think he was 16 years old, it was well before the 2015 World Cup in Chile, where he shone. In fact, I have been working with him since the age of 14 with my partners.

“It is thanks to my associates in Nigeria. It is especially Shira Yussuf who discovered him at the age of 14, he told me about it very quickly. Thereafter, we contacted Emmanuel Amuneke, then coach of the country’s U17s. We told him: “Go see this youngster, he’s a phenomenon.” We insisted, he saw him and gave him a chance in his team.

“Before the 2015 World Cup, we offered him all over Europe but to no success … And then after the 2015 World Cup, everyone was calling me, but he could have left Africa at a very affordable price. When he exploded in Chile, interest skyrocketed. Finally, I got him signed when he turned 18 at Wolfsburg, and after Charleroi then in Lille, and finally 99% in Naples…

“With my partner (Didier Fresnay), when everything was going to happen, we were suddenly dismissed to be replaced by a new agent (William D’Avila). July 13 in the morning, Victor asked me to accompany him to Naples to finalize everything. I said, “Ok,” but my flight to Naples was finally full and I couldn’t get there.

“Fortunately, moreover, because Lille had chartered him a private flight to go to Sardinia, to Olbia, where the two club presidents were present. He couldn’t sign without me. My lawyers sent an email to Victor, Naples and LOSC. And on July 14, I in turn received an email “stopping abruptly and without cause” my mandate of representation with Victor Osimhen which was in effect until January 2021.

“While the two clubs had agreed on the terms of the transfer weeks before, and all the details of Victor’s contract were known, the player had his medical visit in Rome during the week. Which is no doubt that his contract was signed with Naples.

“We have correspondences from Napoli, there is a guaranteed commission that we received by email from Mr. Giuntoli (Napoli‘s sporting director) of five million euro for the work done, which constitutes about 8% of the total gross contract negotiated. We were far from negotiating personal bonuses as Victor told the press! These are nonsense that they put in the head of the player.

“I am aware that this may seem important to ordinary people, but it is a work of many years, of personal sacrifices which have resulted today in making Victor Osimhen the player he has become, and so the value he now has in the market! And when everything is going to be realized, we are removed to put a new agent!

“We have been in contact with them since March. With the Covid-19, we finally managed to see each other at the end of May, early June in Monaco with Giuntoli and then we moved with the player at the beginning of July to Naples.

“To be clear, if we were in Italy it was because the two clubs have had an agreement for a long time and they told us so. I think that Lille were not happy that Victor came back without signing his contract. They had a knife under the throat with the DNCG (for their professional license).

“To be honest, Victor did not want to go to Italy. From the start, he has been stuck on the idea of playing in Serie A. He told me that racism issues scared him and that he didn’t feel like moving. He even told me in March-April: ‘I don’t want to go and play in Italy even if it’s for Juventus at € 10 million net per year.’

“I told Victor that before having such strong ideas, that he had to travel to see for himself, meet people, talk with players who are confronted with racism. Something that we finally did on July 1, 2 and 3 where we met the coach, the sports director, as well as the president De Laurentiis, who is a man with values and experience, and who seemed to have convinced the player.

“Victor also spoke a lot with Kalidou Koulibaly and this was decisive in his choice for Napoli. It must also be said, when a big club like Napoli offer you a starting place, with a contract of around 30 million euro net of taxes, it helps to make a decision at 21!

“What I understand is that they are trying to justify the work of the new agent, having resumed negotiations from the start. I am in a hurry to discover the final contract signed by Victor, and to compare it with what we had done with Napoli formally.

“On the morning of July 13, Luis Campos and Gérard Lopez contacted me by phone, strongly recommending that I negotiate with this new agent, otherwise, according to them, “I risked losing everything …” For me, Osimhen signed on the 14th, 15th or 16th. You can’t buy a 60 million euro player by having him undergo his medical examination without having already signed his contract.

“There is a lot of pressure. He certainly lost his footing. There’s this William D’Avila who must have been wooing him for a while. Maybe he told him that we could get him a better deal. I see him on July 9 in Paris to make a point, on the 13th, he tells me to take the plane to join him, while the new agent is there … It is not possible because it is us who did all the work. And you do not go twice to Naples, in particular to Sardinia, without having signed contract.

“We have always worked honestly with Victor, which many agents cannot say, we are within our rights. And if we have to go to court to save face, we’ll go … I would add that in my opinion, we do not go before an organization as serious as the DNCG without providing evidence that the operation of ‘flagship’ sale of the summer will be formalised.

“We are quiet. My lawyers have all the documents on the work done. I will therefore assert my rights in court. Afterwards, it is very likely that I can be offered a compensation, which I will not accept.”