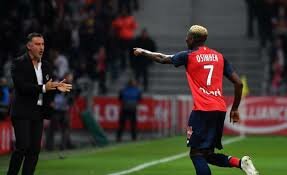 Lille Metropole of France striker, Victor Osimhen has declared himself fit to play this weekend against Olympique Marseille, while also raining accolades on the Ligue 1 club’s coach, Christophe Gatlier, as he revealed that the warm welcome he received from the gaffer helped him settled down quickly and feel at home, following his arrival at Stade Pierre Mauroy in July.

Megasportsarena.com reports that the Chile 2015 FIFA U-17 World Cup top scorer is having his best season ever, enjoying a massive turnaround in fortunes playing under Gatlier as he failed to make the first team at VfL Wolfsburg of Germany, when he moved to right after the Cadet Mundial.

He failed to make his mark in four years with The Wolves, who eventually decided to loan him out, but his first port of call ended in a fiasco, as Zulte-Waregem of Belgium claimed he was not fit enough to make their squad, only for their league rivals, Sporting Charleroi to snap him up few weeks later, and Osimhen turn into a revelation, as he exploded on loan last season.

Charleroi turned the loan deal into a full contract in the summer and then, amazingly, quickly sold him outright to Lille, which has now becoming the turning point in the lad’s career for both club and country, but tops of his gratitude is the role Gatlier has played in reshaping his game.

Despite playing a total of 14 top-flight games in two seasons with Wolfsburg, Osimhen struggled to establish himself in the German club and eventually secured a loan move to Charleroi, where he played the entire 2018/19 season and scored 12 goals in 25 league matches.

Lille then signed him as Nicolas Pepe’s replacement, and Osimhen has since rewarded the Ligue 1 side with seven goals in nine matches so far this season, for which he is thanking Gatlier for the tips that enabled him adapt quickly and find his feet in the top-flight team.

Sadly, Osimhen has been hit with a groin injury, which put him in doubt for this weekend’s Ligue 1 clash against Marseille as well as Lille’s UEFA Champions League return clash away to Valencia of Spain next week, but the youngster insists he is fit enough to line out for Gatlier’s side.

He played down fears that the injury is so serious to make miss Nigeria’s 2021 Africa Cup of Nations qualifiers against Benin Republic and Lesotho next month and, though he will undergo more scans on the complaint to determine the extent of the blight, he tagged it ‘minor’ and prefers looking on the bright side of his continued burst of form under Gatlier.

Osimhen told BeIN Sport: “The first time I arrived in Lille, he spoke to me and told me that I will be important to the team, even before touching a single ball, he told me that he had seen many of my matches with Charleroi.

“Since I got here, he has been wonderful to me. Even when I play a bad match, he speaks to me, explain to me my mistakes and try to make me progress during the training sessions. For a young player like me, there is no better motivation.

“It is for me to return to the field what it brings me every day and I want to continue to make him happy with my performances. He is one of the architects of my career and I will never forget that. I watched the club last season, there are great players here, my priority is to get into the game as quickly as possible and prove to the fans what I can do, I want to continue like this.”