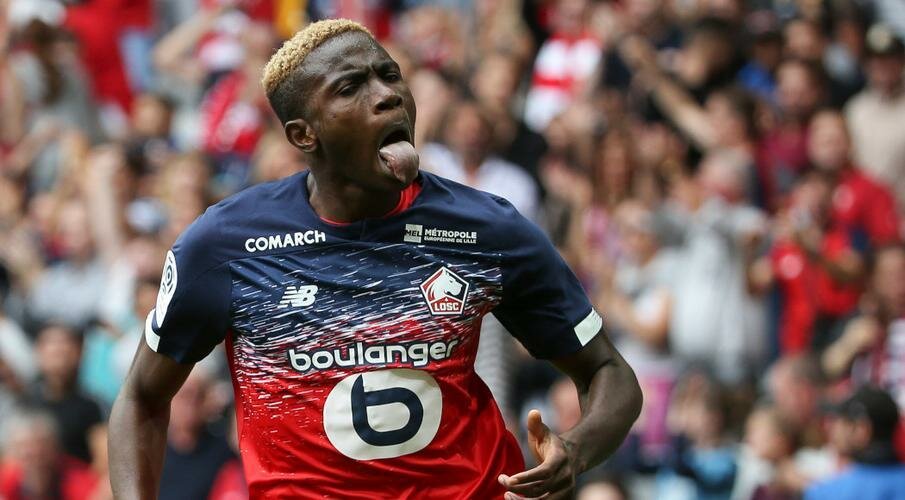 Paris Saint-Germain of France defender, Marquinhos says he and his colleagues in Brazil’s national team must keep their eyes on Lille Metropole striker, Victor Osimhen for every second of this Sunday’s international friendly in Singapore, because he knows the youngster can wreak havoc on any opposition, megasportsarena.com reports.

Marquinhos admitted he is impressed with Osimhen’s massive burst of form in only his first season in the French Ligue 1, where the Brazilian stopper noted that the young striker is defying the fact that he was largely unknown before arriving from Sporting Charleroi in the summer, such that the former VfL Wolfsburg of Germany lad will be a huge threat to watch on Sunday.

Although Osimhen never found his range in five years at Wolfsburg, where he was left to wallow in their reserves’ squad, the Chile 2015 FIFA U-17 World Cup top scorer and eternal highest ever in the Cadet Mundial’s history has hit tremendous form with Lille, such that Marquinhos knows the potency of his presence in the Nigerian squad for Sunday’s international friendly.

Heading into Sunday’s 1pm kick-off at the arena in Kallang, the 25-year-old Marquinhos is sure to come up one-on-one with Osimhen, considering that he plays as a centre-back and starred in Le Selecao’s 1-1 draw with Senegal on Thursday, hence his call for caution during Sunday’s tie at the same venue in the Asian island nation.

Osimhen has enjoyed a successful start to his career with Lille, with seven goals in nine Ligue 1 games, five of them in home fixture, which led to him named his club’s top player for September, several appearances in team of the week and in line to clinch the league’s Player of the Month award, having been shortlisted along with Monaco’s Islam Slimani and Nantes’ Nicolas Pallois.

All these have created a massive and very rapidly expanding buzz round Osimhen at home and abroad, much so also with Marquinhos, who admits that the youngster can wreck Brazils’ side if not properly watched during Sunday’s friendly in Singapore.

Marquinhos posited: “Nigeria have very physical and skilful players. Osimhen has done well at Lille. Virtually unknown before his transfer but now everyone knows him. That shows he can be very dangerous. We have to put an eye on him.”