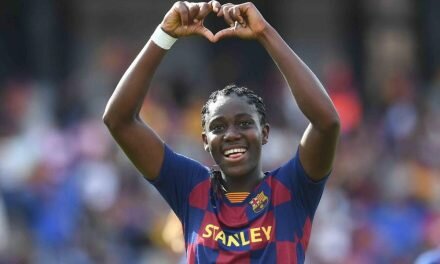 Barcelona Femeni of Spain attacker, Asisat Oshoala has received a new tag of ‘Nigerian Killer’ from her club, following her stunning goal for the team in the UEFA Women’s Champions League victory over SK Minsk of Belarus, megasportsarena.com reports.

Barca have now credited Oshoala with 15 goals in all, since her arrival from Dalian Quanjian of China, first on loan before sealing a full deal, after ‘Super Zee’ netted for the third straight game, helping her side to a 5-0 win over fellow-Super Falcons’ star, Emueje Ogbiagbevha’s Minsk in the first leg of the last sixteen of the UWCL on Thursday night.

Oshoala and Ogbiagbevha both started for their respective teams, but it was the former Arsenal and Liverpool Ladies of England star who stood out, when she struck from close range to open scoring in the sixth minute of the encounter, before Marta Torrejón made it 2-0 in the 20th.

Aitana increased Barcelona’s lead in the 22nd minute, firing a low shot into the bottom corner of the net after a delightful pass from Oshoala, then scored again on 26 minutes to make it 4-0 and, on the hour mark, the three-time African Women Footballer of The Year was replaced by Jenni Hermoso, who wrapped up the scoring with five minutes left on the clock.

A breakdown of her log shows that Oshoala has also scored 11 goals in 12 Liga Iberdrola games since linking up with the Catalan club in January, while Ogbiagbevha, who also played all 90 minutes of Thursday’s match, is joint-top scorer in Belarus with nine goals.

Oshoala’s streak started on September 29, when Barca beat Sevilla 2-0 in the Primera División Femenina, and in their next league game she netted the winner against Sporting de Huelva, with the club revealing on social media that her feat on Thursday took her haul to 15 goals in 19 ties.