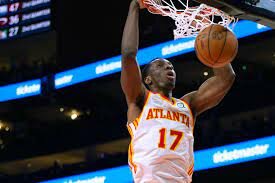 Atlanta Hawks of America’s emergent youngster, Onyeka Okongwu got into the spotlight of USA’s National Basketball Association (NBA) with a gritty outing for his side won by a single point away to Miami Heat.

Megasportsarena.com reports that, while Bam Adebayo and Victor Oladipo could not get into the match highlights, Okongwu was the Nigerian-born lad to hail, as Game 3 and the season hung on the balance for The Hawks.

Young delivered, hitting a floater in the lane with 4.4 seconds left that gave The Hawks a 111-110 victory over top-seeded Miami after Atlanta overcame a 16-point deficit in the second half to see the Hawks cut the Heat’s series lead to 2-1.

Jimmy Butler missed a jumper with 12.6 second left that could’ve given The Heat a three-point cushion.

The Hawks grabbed the rebound and got the ball in Young’s hands, passing up the chance to call a timeout before he hit the pivotal shot.

Miami had one more chance to win it, but Butler missed again on an off-balance three at the buzzer with De’Andre Hunter in his face to give the Hawks a burst of hope in the best-of-seven series.

P.J. Tucker led a 21-0 run in the third quarter that pushed The Heat to an 84-68 lead and seemingly on cruise control to a 3-0 lead, but Young would not let them get away.

On a night when things went tight but right for The Hawks, Okongwu was seen battling tooth and nail, as his side’s top star, Trae Young struggled in the first two games of the playoffs.

While Okongwu played as a substitute, Bogdan Bogdanovic added 18 points, Hunter 17 and three others scored in double figures to take some of the pressure off the star guard.

Coming off a 45-point effort in Game 3, the best playoff game of his career, Butler was held to 20 in this one and missed a prime opportunity to put Miami on the cusp of a sweep, while Tyler Herro led The Heat with 24 points, and Max Strus had 20.

The Hawks went with just three players off the bench, but all made huge contributions. Bogdanovic made four 3-pointers, Wright had 13 points, while Okongwu had nine points and six rebounds.

Most tellingly, all three played the entire fourth quarter, forming an effective group with Young, ahead of another time to thrill with Game 4 this Sunday night in Atlanta.