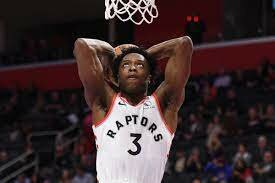 Toronto Raptors of Canada star, OG Anunoby got a bitter-sweet night in USA’s National Basketball Association (NBA) playoffs, as he hit some wayward shots but still ended with 26 points on the night, yet his team lost to Philadelphia 76ers.

While Anunoby struggled for accuracy for the better part of the encounter, Joel Embiid made a 3-pointer with 0.8 seconds left in overtime to give Philadelphia a 104-101 victory over Toronto and a 3-0 lead in the first-round series.

After 76ers’ coach, Doc Rivers called a timeout to save the possession as the shot clock was running down, Embiid took an inbounds pass from Danny Green with 0.9 seconds left on the shot clock and hit a turnaround shot from near the sideline.

Megasportsarena.com reports further that Anunoby could not get a shot off before the buzzer, but Embiid had 33 points and 13 rebounds that helped The 76ers rally from a 17-point deficit.

On the other hand, James Harden had 19 points and 10 assists before fouling out in the closing seconds of regulation.

Tyrese Maxey scored 19 points and Tobias Harris had 11 points and 12 rebounds for The Sixers, against who Anunoby scored 26 points and Gary Trent Jr. had a playoff-high 24.