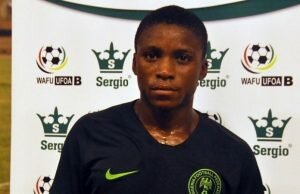 Nigeria’s cadet national team, Golden Eaglets’ top striker, Olakunle Olusegun has set a target of more goals for himself at this year’s FIFA U17 World Cup in Brazil, as he wants to rank among the competition’s legends over the years, megasportsarena.com reports.

Nigeria has a strong tradition of producing top scorers at the competition, with Wilson Oruma at Japan ’93, Macauley Chrisantus at Korea 2007 and Victor Osimhen at Chile 2015, while Femi Opabunmi and Kelechi Iheanacho were joint-highest in 2001 and 2013 respectively, such that Olusegun believes he can join the roll call.

Although he admitted it would be moiré about team work and playing together for the common goal when the Cadet Mundial begins this Saturday, with Nigeria playing Hungary start group play same day, the Abubakar Bukola Saraki (ABS) FC of Ilorin youngster said he has to fulfill his duty in banging goals, which he hopes to do aplenty in The Samba Nation.

After winning the award for highest goals scorer in the regional qualifiers for this year’s African U-17 Cup of Nations, Olusegun could not repeat that feat at the continental championship proper in Tanzania, but has now since resumed raining them during build-up friendly matches, two of which he notched last Wednesday against South Korea.

During the zonal qualifiers in Niamey, Olusegun was named man of the match after he scored Nigeria’s second goal in the 2-1 victory over host country, Niger Republic to secure a place in the final of the WAFU zone B competition, after winning the second semi-final of the competition.

He is now looking beyond the regional and continental levels, as he admits he needs to step up from falling short during the UEFA/CAF Assists Invitational in Turkey and his own personal assessment that he has not done enough during the Eaglets’ build-up matches as well.