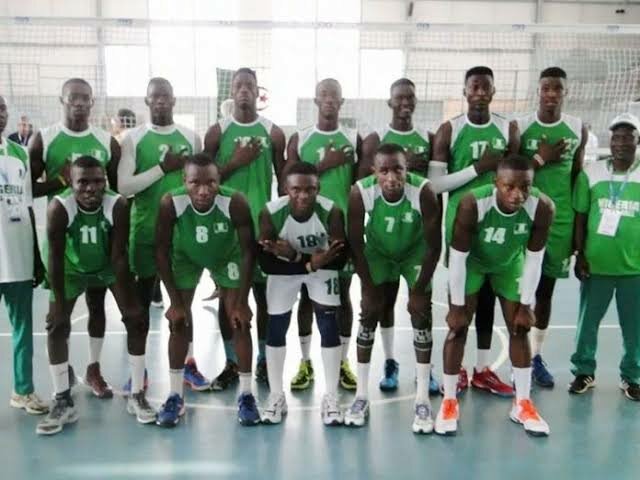 Nigeria’s under-19 male volleyball team have soared on the wings of recent credible outings, with a justified spot as number 14 in the world now to their name, after accruing 42 points on the latest ratings by Federation Internationale de Volleyball (FIVB), megasportsarena.com reports.

This comes two months after Sani Mohammed’s boys had a credible outing at the 2019 FIVB Volleyball Boys’ U19 World Championship in Tunisia, where the team defeated USA, Czech Republic, South Korea and Dominican to finish in the 14th position.

The team, though, remain second in Africa behind the silver medal winner, Egypt who are currently ranked fourth in the world, while Nigeria’s under-20 women move one place up to 19th position with 18 points, level with Chinese Taipei and Chile.

While Nigeria’s senior women and men national teams are ranked 85th and 93rd respectively, after the 2019 African Games in Morocco, the country’s male under-21 team join Peru and Germany in 25th position with 14 points in the FIVB world rankings.

Although Russia hit Nigeria’s under-19 team 3-0 (25-15, 25-14, 25-17) in their third game of the championship, Mohammed’s lads shot to third place with victory over South Korea, after which the coach said his players’ determination was high but they lost concentration along the way.

In his reaction the president of Nigeria Volleyball Federation (NVBF), Engineer Musa Nimrod expressed delight over the rankings of the age grade teams and enthused that the future is bright for the game in the country.

He added that Nigeria can boast of players who can take over from graduate from the ranks without the fears of replacement, as the country has many younger players scattered across club sides all across the federation.

Nimrod said: “One of the reasons why I ran for the office of the President, Nigeria Volleyball Federation was to groom players from the grassroots to limelight. For the first time in history, the nation’s U19 Boy’s team is ranked 14th position and this means a lot to me.

“The boys shocked the world at the 2018 African Youth Games in Algeria where they lifted the trophy. They also participated at the FIVB 19 Boy’s championship held in Tunisia where they placed 14th position out of 21 teams.

“We should not also forget in a hurry that the nation’s U20 women’s team finished 4th position at the 2018 African Championship held in Kenya and now they are 19th in the world. I am the happiest man in the world right now and with these rankings, it means that the future of volleyball is bright.

“If you look at the volleyball clubs in the country, you will see that most of the U19, U20 and U23 players are scattered across clubs in the Division one and Premier League and one exceptional player, Arinze Nwachukwu is currently playing is trade with Fernabache of Turkey.”