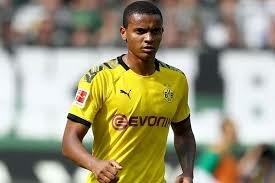 Borussia Dortmund of Germany defender, Manuel Akanji is attracting keen summer transfer attention from Arsenal of England, with The Gunners said to be hot on the Nigerian-born Switzerland star’s heels, as they are in the market for a young centre-half signing at the end of this season.

Megasportsarena.com gathered that, although the London-based club have also been linked with a raft of other potential signings in the upcoming market, Fussball Transfers reports that the latest name under consideration by the Emirates Stadium outfit is Akanji.

The report adds that The Gunners were in contact with the player’s camp in January, with the view to pulling off his signing him this summer, with Dortmund reportedly willing to sell him for between €25 and 30m, while counting on Arsenal firming up their interest in the coming weeks.

A report by Sportsmole added: “Arsenal are lining up a £25m move for Borussia Dortmund defender Manuel Akanji. The Gunners are expected to be in the market for a new centre-back this summer despite the fact that William Saliba is due to arrive at the club following a loan spell at Saint-Etienne.

“Barcelona’s Samuel Umtiti continues to be linked with Mikel Arteta’s side, but according to FussballTransfers, the capital giants are putting together a £25m deal for Akanji. The report claims that Arsenal held talks with BVB in January over a potential summer deal, and the 24-year-old could now be heading for the Emirates Stadium in time for the 2020-21 campaign.

“Akanji, who joined Dortmund from Basel in January 2018, has made 34 appearances for Lucien Favre’s side during the 2019-20 campaign, including 24 outings in the Bundesliga. The Switzerland international also played the full 90 minutes as BVB recorded a 4-0 win over Schalke 04 on their return to Bundesliga action last weekend.”