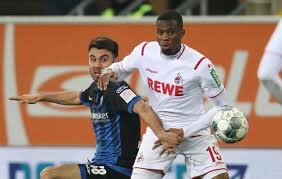 FC Cologne of Germany defender, Kingsley Ehizibue has caused a stir among fans of his German Bundesliga club, after publicly stating his admiration for two of their rival players, Jadon Sancho and Timo Werner, who are currently on fire with Borussia Dortmund and RB Leipzig respectively, megasportsarena.com gathered.

While also confessing that he admires the quality that is being exhibited by Bundesliga table-topping Bayern Munich, the 25-year-old new Super Eagles’ invitee left many fans and analysts wondering when he declared that he is impressed with the quality, form and performances of his club’s major foes.

Aside hailing the results and points being garnered by Hans-Dieter Flick and The Bavarians so far in the ongoing campaign, Ehizibue declared that he is using the quality being exhibited by highly rated opposing players to build up his own ability to excel with his Mungersdorfer Stadion-based outfit.

He has already gained recognition from Eagles’ coach, Gernot Rohr, as he was on the list of invitees for the postponed 2021 Africa Cup of Nations qualifiers against Sierra Leone, and he has also helped his club up to 12th position on the Bundesliga log, with 35 points from 31 outings.

However, he is still in awe of Munich, whose players he opined perform like robots, which he says is one major reason why Flick’s men are on a 13-game winning streak and sit comfortably at the top of the table with 73 points from 31 games, seven above second-placed Dortmund.

Bayern have only lost four games this season, which were against TSG Hoffenheim, Eintracht Frankfurt, Bayer Leverkusen and Borussia Monchengladbach, with just four draws and a massive haul of 23 victories, which have left Ehizibue totally in awe of their form.

The youngster, who returned to Germany last summer and is currently enjoying a breakthrough campaign in his country of birth, equally disclosed that he is taking inspiration from the form of Sancho and Werner, as he admits both youngsters encourage him to believe he can achieve a lot more with The Billy Goats, who he joined on a four-year contract from PEC Zwolle of Holland.

So far this season, the ubiquitous right-back has been a consistent starter and excellent performer for Markus Gisdol’s squad, for which he has 29 appearances across all competitions, and Ehizibue posited that playing in the Bundesliga has given him the chance to rub shoulders with good players, especially those with whose style he is always impressed.

Ehizibue told Dutch website, Voetbal International: “I played against a lot of big teams and big players. Jadon Sancho and Timo Werner, in particular, are really very good. It all seems so simple what they do, so easy. But it is so incredibly good. At Bayern, they think ten steps ahead. I don’t know what they’re doing there in Munich, but they’re like robots.”