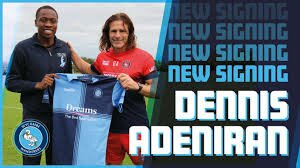 New signing at Wycombe Wanderers of England, Dennis Adeniran has gained a special citation from the English Championship club’s coach, Gareth Ainsworth, who declared that the attacking midfielder who recently joined his club on loan from Everton showed great talent on his debut.

Megasportsarena.com gathered that, while another Nigerian player, Fred Onyedinma got an 11th minute booking and was replaced in the 69th minute in action for Wycombe, all eyes were on Adeniran, who was on for the entire duration of play, but could not save his side from losing 2-0 at home against Swansea City.

Despite that setback, Ainsworth is celebrating the new arrival at Adams Park, who is now on a season-long deal from Goodison Park, but the gaffer admitted that Adeniran was only signed as a replacement for former Flying Eagles invitee, Nnamdi Ofoborh, who had a successful loan spell with The Chairboys in the past campaign and helped them secure promotion via the play-offs.

An instant replacement was required once Ofoborh returned to Bournemouth, and Adeniran got the nod to step in for the fellow-Nigerian-born youngster, after which he went on to cause a stir just a day after his deal was confirmed, with the former England under-17 international going the distance on his full Championship debut.

Although Wycombe suffered defeat against Swansea, Adeniran has been praised by Wycombe’s coach for his performance against The Swans at Adams Park, as Ainsworth reeled out key points about the quality of the Everton lad, whose only other appearance in the Championship was as a substitute during his days with Fulham, back in the 2016/17 season.

Ainsworth stated: “Dennis is an exciting young talent who has all the attributes to become a really important player for us this season. He’s a really energetic, box-to-box midfielder, and comes here eager to learn and develop his game.

“We believe he can do just like many other young loanees who’ve joined us early in their careers. We’ve had a few injury and suspension problems in the middle of the park so Dennis arrives at a key time and adds extra competition for places.

“We wanted Nnamdi [Oforboh] back but it looks like he’s sticking around at Bournemouth, so we’ve struggled with that defensive midfielder position. But Dennis came in and in the second-half, he looked like he had been playing league football all his life.

“For someone to come and take that into his stride and have a Championship performance like that is very good for the future. Second-half, he looked like he had been playing with us for a long time and you can tell he has played at a high level. He’ll be a great asset for us.”