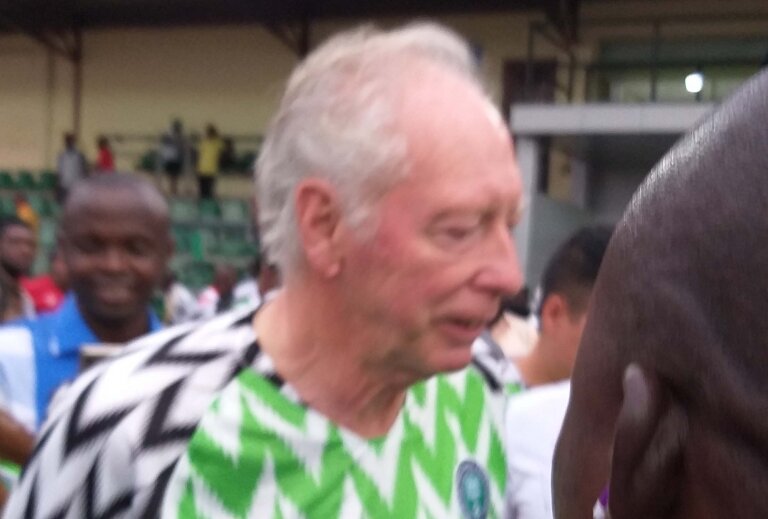 Former Super Eagles’ coach, Johannes Bonfrere has faulted the tactics employed by the Nigerian B-squad’s interim handler, Imama Amapakabo in Saturday’s 2-0 win against Togo, as the result was not good enough to qualify the team for next year’s Championship of African Nations (CHAN).

Megasportsarena.com reports that, although Bonfrere admitted it was always going to be tough for the home-based Eagles to overturn a 4-1 deficit from the first leg in Lome, the Dutch tactician scolded Amapakabo for resorting to long ball tactics, rather than allowing his players plan build-ups from the back.

The Atlanta ’96 Olympics gold medal-winning coach, who also took Nigeria to silver at the 2000 Africa Cup of Nations in Lagos, added that he would have also preferred seeing Amapakabo’s side play from the wings, instead of going through the middle.

He added further during Mega Sports on Star 101.5 FM, Lagos that the Eagles’ top striker was left struggling all through the game, because the ball was not placed at his feet and the Nigerian defenders could not link the attack through the sidelines.

The former assistant to Nigeria’s legend coach, Clemens Westerhorf, of Tunisia ’94 AFCON and USA ’94 World Cup fame, concluded with a verdict that it was faulty to pump the ball into the air in efforts to destabilize the opponents’ defence, as he pointed out that the visitors’ back-four had a field day heading it back out of their area because they were taller than the Nigerian lads.

Bonfrere added: “Nigeria played long balls all the time into Togo’s area, but the opponents were taller. The number nine should have had the ball at his feet, for him to do better and then use his body to attack the goal.

“The second point is that they should have gone through the wings. Playing from the sidelines would open the game and free the Nigerian defenders to play with the midfield. That’s where they got it wrong. That’s the mistake they made in this game.”