Iwobi Gets Knocks From Allan Shearer, After Costly Error Against Tottenham 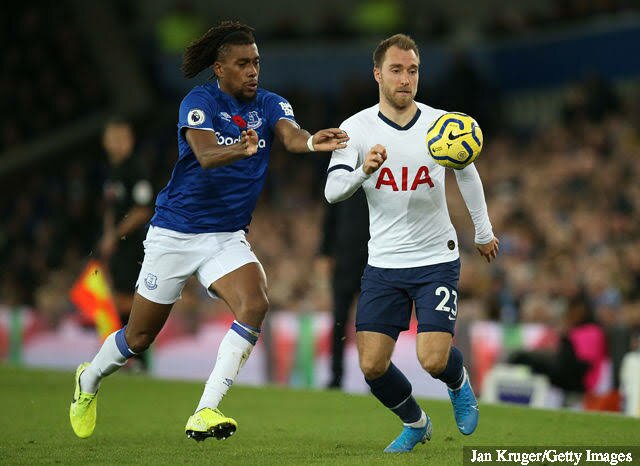 Everton of England midfielder, Alex Iwobi has received knocks from English soccer legend, Alan Shearer over the goal conceded by The Toffees’ in Sunday’s 1-1 draw at home against Tottenham Hotspur, with many of the Merseyside club’s fans also calling for the Nigerian star’s head, megasportsarena.com reports.

Although The Toffees eventually cancelled out Dele Alli’s opening goal in the game at Goodison Park, it was a nervous fight all the way into added time for the hosts, and Shearer insists it would have been a different story had Iwobi not giving the ball away with a lame pass and Spurs took full advantage of to convert on the counter.

Towards the final whistle, though, Iwobi’s blushes were saved when Cenk Tosun’s 97th-minute equaliser earned Everton a share of the points with Spurs, after Andre Gomes suffered a horrific ankle injury, for which Heung-Min Son saw red.

Sub Tosun’s bullet header cancelled out Alli’s 63rd minute opener, but the game will haunt Iwobi with his error and a disallowed goal for the visitors, but it would be mostly be remembered for, unfortunately Gomes’ 79th minute gory injury, which forced 12 minutes of stoppage time.

Gomes got his ankle stuck in the turf as Serge Aurier approached after the Portuguese was tripped by Son, and though the South Korean was initially booked, he was then given a red and left the field distressed and shocked.

Everton manager Marco Silva said after the game that he was 100 per cent sure it was not Son’s intention to injure Gomes, while Mauricio Pochettino said some Everton players, including captain Seamus Coleman, approached Son after the game to console him in the Spurs dressing room.

Pundits are unanimous that Sunday’s draw does not help either struggling side, as it left Spurs without an away league win since January and Everton 17th on the log, but it is Iwobi who gets the bigger part of knocks from Shearer, as the Newcastle United former skipper and coach dissected the Super Eagles’ star’s missing links during the game.

Shearer posited during BBC Match of The Day: “It was a silly mistake from Iwobi. He should have taken the option of a simple pass to Gomes, but he picked a wrong one, straight into the feet of Son. And then that brilliant finish from Alli.”