Israel Adesanya Seems To Be Getting Better, UFC President Posits 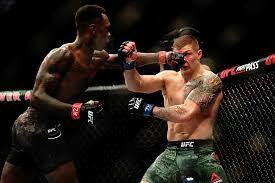 Nigeria’s Ultimate Fighting Championship (UFC) middleweight champion, Israel ‘Last Style Bender’ Adesanya has been tagged an incredible fighter who appears to be getting better with each bout and still has a lot more to offer in The Octagon.

Megasportsarena.com reports that this is the verdict of UFC president, Dana White, in reaction to Adesanya’s latest victory, as the Nigerian-born champ, who fights out of New Zealand, took Italy’s Marvin Vettori to the cleaners on Saturday night.

White admitted he was stunned and impressed with Adesanya’s performance, as the champ made up for his foibles from the first bout he had with the same opponent, but he was excited this time and declared emphatically afterwards: “I’m still the king,”

Indeed, Adesanya (21-1) did not like the way his first fight against Vettori went and, despite winning in a split decision, the UFC middleweight star was eager to make a bigger impact and that he did in the early hours of Sunday.

Adesanya left no doubt in the rematch, pummeling Vettori with a flurry of kicks to the head and legs to defend his title, as he kept out of reach from the Italian’s powerful punches most of the night and used his feet effectively.

Fight purists gloated, as Adesanya dominated Vettori at UFC 263 Saturday night, in the third full-capacity event after the coronavirus pandemic outbreak, with ‘The Last Style Bender’ earning a unanimous decision to remain undefeated in the middleweight division.

In effectively keeping the Italian fighter off balance, the Nigeria-born New Zealander won 50-45 on all three judges’ scorecards, just a month after Adesanya lost to light heavyweight champion, Jan Blachowicz in his last fight while trying to add a second title belt at a higher weight.

Adesanya and Vettori fought in Glendale three years ago, a split-decision win by Adesanya that left neither fighter satisfied, as the Italian believed he won and the Nigerian admitted it was too close to call.

Adesanya and Vettori first met at UFC on FOX 29 in April 2018 and, though it was only his second promotional appearance, ‘The Last Style Bender’ defeated the Italian by split decision.

Both fighters took different journeys to UFC 263, as Adesanya went on to win the interim UFC middleweight belt against Kelvin Gastelum, then defeated Robert Whittaker to unify the title, then defended his 185-pound title against Yoel Romero and Paulo Costa.

On his part, Vettori was unbeaten since the loss to Adesanya, as he bounced back with consecutive victories over Cezar Ferreira, Andrew Sanchez, Karl Roberson, Jack Hermansson and, most recently, Kevin Holland.

‘The Italian Dream’ won his past five in a row, including back-to-back wins over Hermansson and Holland, but he was not match for Adesanya, who made the best of the first rematch of his career.

Vettori (17-4-1), as he did in the first fight, had some success on the ground in the rematch after a couple of takedowns in front of a sold-out crowd, but Adesanya wriggled free and was active with his feet, wearing out the Italian’s front leg while dodging most of his big punches.

Adesanya, who snaked out of another takedown in the fifth round and continued to work over Vettori with his feet to defend his title, declared: “Even when he stood up at the press conference, I sat down because I didn’t feel any threat.”

In reaction to the champ’s latest successful title defence, White submitted: “Adesanya is unbelievable and he seems to be getting better.”