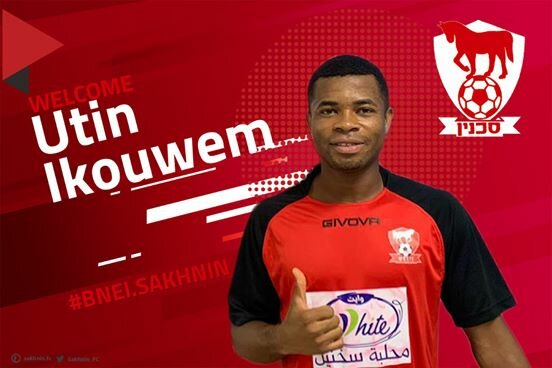 It is another career step forward for the 20-year-old Utin, who started his European career in Israel after completing a three-year deal with Maccabi Haifa from Enyimba in May 2019; just two years after he was promoted from The Peoples Elephant’s youth squad to the first-team in 2017.

He was part of Nigeria’s squad to the 2019 Africa U20 Cup of Nations in Niger Republic, where he captained the squad to fourth place after bowing to South Africa via penalties in the losers’ final and was earlier named NFF Young Player of the Year in 2018 after helping the home-based Eagles to a second-place finish at the 2018 Championship of African Nations (CHAN) in Morocco.

The Akwa Ibom State-born defender was also part of the Flying Eagles’ squad to Poland for the 2019 FIFA U-20 World Cup, where he played every minute in each of their games before the side handled by Coach Paul Osahon Aigbogun were knocked out by Senegal in the round of 16.

He is now the latest addition to join Eldad Shavit’s team ahead of the Israeli Premier League’s new season kick-off next Saturday August 8, for which he will hope to get regular playing time in Sakhnin, as he had only 176 minutes of action in seven games with Haifa last term; but his new club are one of two teams promoted after finishing second in behind Maccabi Petah Tikva.

It is another chapter opened for Utin, while another top division club, Hapoel Haifa also signed promising center forward, William Agada, who began his career in Israel with the youth team of Maccabi Tel Aviv.

Hapoel Haifa have included a purchase option into the loan deal that takes the 20-year-old Agada away from Hapoel Katamon, with which he had an outstanding campaign, scoring 15 goals last time out in the Liga Leumit and eight the previous season.

A new challenge is now in store for Utin, who has played four games for the Super Eagles, as he will have to meet up to the ambitions of his team at Doha Stadium in Sakhnin, as they are the most successful among the Arab-Israeli clubs in the country, but last won the State Cup in 2004.