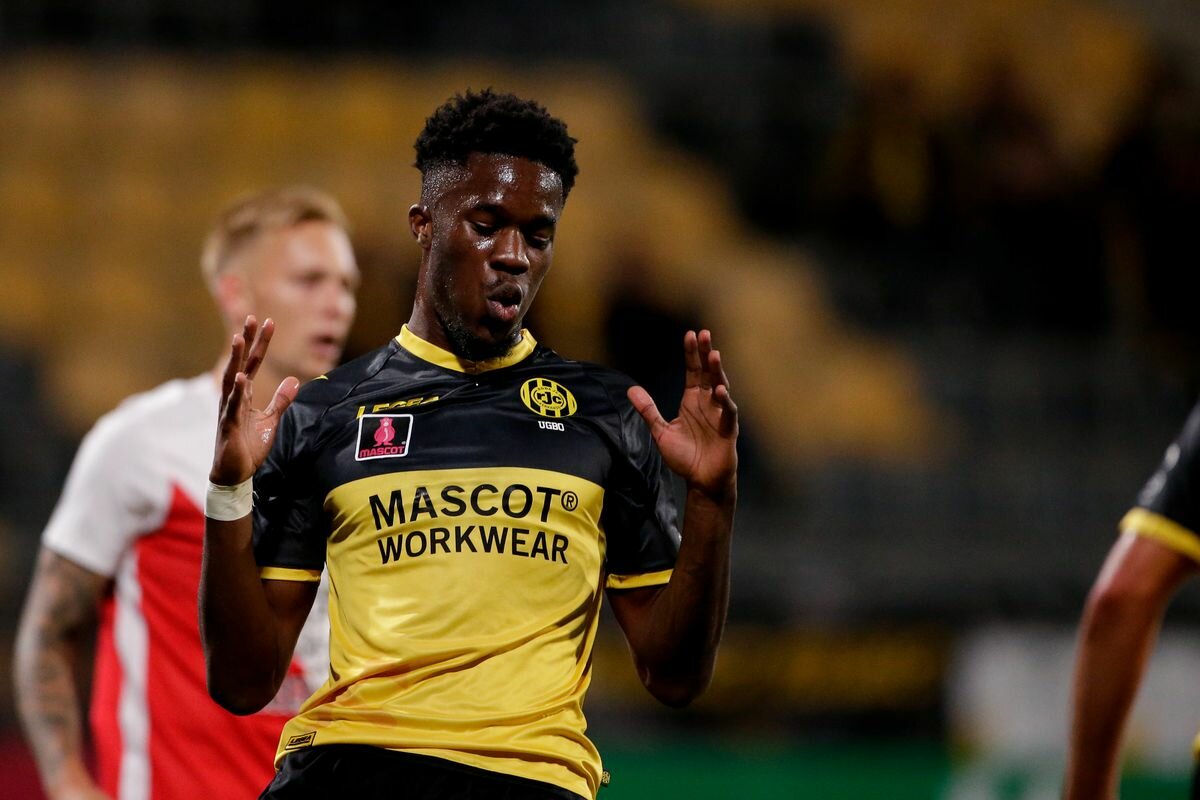 Roda JC Kerkrade of Holland striker, Ike Ugbo has disclosed that he is enjoying spell in the Dutch lower division, and described as the best loan deal he has enjoyed from his parent club, Chelsea of England, megasportsarena.com reports.

After several previous loan spells outside Stamford Bridge at lower division clubs in England, the Nigerian-born attacker says the Roda deal has turned out to be the best ever, and he believes he still has lots of fun still lying ahead of him.

The 21-year-old, who is shining with Roda in the Dutch second-tier, where he has scored six goals in 12 matches, recalled that he did not have it too well in his first loan deal at Barnsley, before also playing for MK Dons and Scunthorpe United.

However, while reflecting on his early days in Holland, Ugbo enthused that taking his first deal outside England has turned out to be a huge positive step for him, but went on to admit he still has ambitions of eventually playing in the English Premier League.

Ugbo told Goal: “It is one of the best starts I have had so far in all of my loan spells. Everyone is looking after me here, while people at Chelsea are keeping in contact with me.

“I had to approach this loan differently and be more prepared because it is a lot different from being in England. I think I have been progressing well and it has come out on the pitch with good performances every week. I am getting my goals and assists.

“I am showing more of the qualities that I had when I played in the U23s and that potential that I have to push on to the next level. They were all learning curves really and it has moulded me into who I am now.

“When I first decided to go on loan, I wasn’t really open-minded to going abroad. I previously had options to go abroad but I was more keen on staying in England and to try to work my way up the divisions to get to the Premier League.

“On my first loan, I didn’t feel I showed the qualities that I really had. I think it was just a different world for me to go out into first-team football and adapt. I don’t think that I adapted quickly enough.

“As I got older, I started to see more European football and it suits me better, especially now at this time in my career. My previous loans weren’t really a style of play that suited me, especially after training at Chelsea.

“When I was playing U23s, we had the ball all the time and we weren’t chasing as much. I am more of a technical player. I am not a long-ball type of striker. Coming out here was the best thing for me at this stage in my career. I am doing well.”