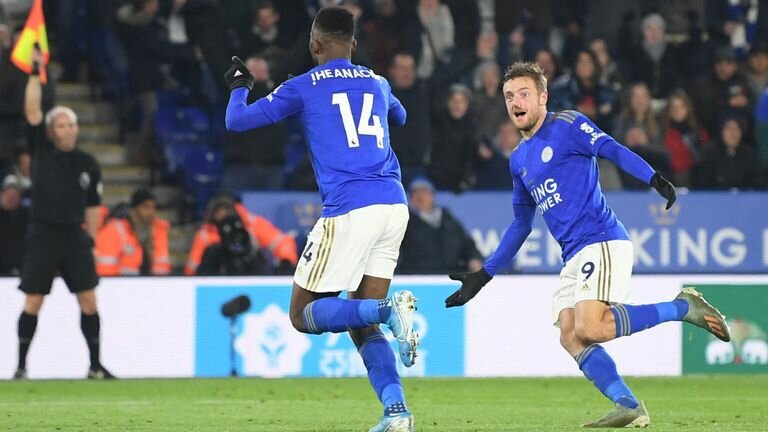 Leicester City midfielder, Kelechi Iheanacho was at the centre of controversy on Sunday night, as his late goal for The Foxes had to go into several minutes of Video Assistant Referee (VAR) checks and review, before it was eventually allowed to stand, megasportsarena.com reports.

The 94th minute effort, which was Iheanacho’s first goal for the club in 13 months, turned out to be Leicester’s winner against Everton and helped Leicester take their run to six games, while also closing the gap on Liverpool to eight points, but it also offered critics another moment to fault the application of VAR so far in the English Premier League.

Also, the late VAR-awarded winner piled more misery on Marco Silva, as Leicester reclaimed second spot in the Premier League with a dramatic 2-1 victory over Everton at King Power Stadium.

Playing as a second half substitute, Iheanacho broke Everton hearts in the fifth minute of stoppage-time when he was allowed to stride through and slot his first Premier League goal of the season past Jordan Pickford despite being flagged for offside.

Adding to the array of confusion, referee Graham Scott let play continue before VAR ruled the goal should stand, with the initial on-the-field ruling of offside deemed incorrect, sparking jubilant celebrations from the Leicester players and backroom staff.

It was the cruelest of blows on Silva’s side, who were within touching distance of a battling away point after Richarlison’s first-half header had been cancelled out by Jamie Vardy’s 13th goal of the season.

With Everton winless in every Premier League game in which they have gone behind with Silva at the helm, and now tilting in relegation zone, the under-fire Portuguese needed a performance from his team from the first whistle.

The Toffees, unshackled from the pressure of playing at Goodison Park, were fast and fluid on the counter and came close to capping their encouraging start when Djibril Sidibe rifled a shot over inside eight minutes.

It was by no means plain sailing for the visitors, though, and Ayoze Perez’s swivel and shot on 13 minutes gave Everton a reminder of the firepower that had propelled Leicester into their five-game winning streak.

Everton’s failure to find a second proved their undoing. Ricardo Pereira drew Pickford into a full-stretch save at the end of a driving run on 54 minutes and substitute Iheanacho also tested the Everton goalkeeper before Leicester finally restored parity.

Iheanacho’s compatriot, Wilfred Onyinyen Ndidi dispossessed Tom Davies in midfield and released Iheanacho in behind the Everton defence, where he unselfishly squared for Vardy to extend his lead at the top of the Premier League’s scoring charts.

With four minutes added on, Iheanacho was allowed to gather Ricardo’s through pass and find the back of the net, despite the linesman’s flag going up, as Everton were floored by yet another contentious intervention from the technology.

Leicester boss, Brendan Rodgers was full of praise for Iheanacho and his colleagues, saying: “I’m so proud of the team. Everton sat in, made it very difficult and went ahead, but we kept patient and in the second-half we had an idea in terms of how we could change the pattern of the game.

“Everton are a good side and have good players, but just before we scored we started to break through. Once we levelled, we had real momentum in the game. Young Kelechi coming onto the pitch was a big turning point for us.”