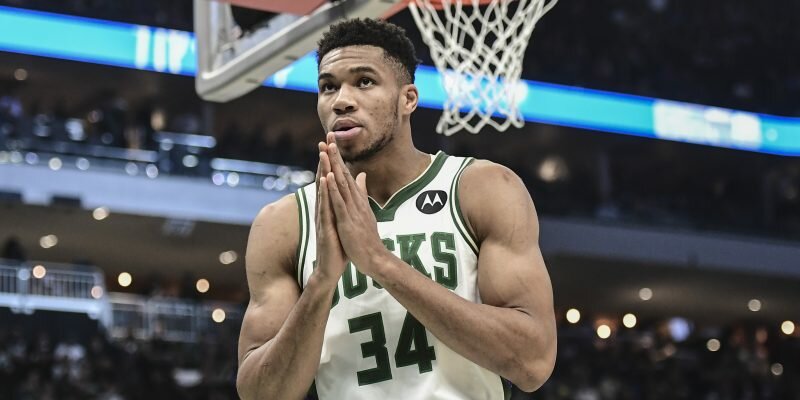 Milwaukee Bucks of America basketball star, Giannis Adetokunbo (Antetokounmpo) has taken time out from his busy schedule by relaxing with some jokes about dads, megasportsarena.com reports.

While showing another side of his jocular self, the Nigerian-born Greek international and two-time most valuable player in USA’s National Basketball Association (NBA) admitted that his best jokes come from a book an Iowa family gave him.

Consequently, the enthusiasm with which Antetokounmpo has been deploying his fleet of corny ‘dad jokes’ has added to his endearing legacy in Milwaukee, though he came especially prepared after a win over Philadelphia 76ers.

Before speaking to the media after his side’s 118-116 road victory, Giannis sat at the podium, cracked open a new book titled ‘Dad Jokes’ and offered his brief dose of humor for the evening.

Earlier on, ‘The Greek Freak’ ended the night with 40 points, 14 rebounds, a key win and an enhanced national appreciation for his dedication to the craft of lame humor, but his story behind the book is even better.

On March 16, Brian O’Donnell stayed up late at his home in Cedar Rapids, Iowa, to catch the end of the game between Bucks and Sacramento Kings.

It was a bit of superstition on his part; his three boys (Brady, 14; Blake, 12; Luke, 9) were excited to voyage to Minneapolis three days later to watch Giannis face off with Minnesota Timberwolves.

O’Donnell wanted to be absolutely sure Antetokounmpo did not get nicked up against The Kings and would, presumably, be active when the four of them sat near The Bucks’ bench at Target Center.

Brian grew up a Boston Celtics fan, but his sons have taken a shine to Giannis, whose wife, Jenny, hails from Wisconsin, so the family had saved for quality seats and found a rare open weekend to make the four-hour trip for a game.

The interest in Giannis had grown for the O’Donnells during a medical scare for Brady last summer, when his appendix ruptured on Father’s Day weekend. Brian and Brady sat together in his hospital room last July and watched the Bucks beat the Nets in overtime in Game 7 of the Eastern Conference finals.

The boys were asleep during the 76ers postgame, but Brian thinks his sons have seen the clip of Giannis telling the ground beef joke; though his youngest son, Luke, reported that none of his friends at school believe the story that the O’Donnells gave The Bucks’ ace that book.

Brian narrated: “I can understand why they wouldn’t. He could have gotten that from anywhere. A couple talk shows .

“They’re like, ‘Giannis is bringing his own Dad Joke book now; he’s really stepping up his game.’ It was one of those surreal things.

“I told my wife, ‘That’s the book the boys gave Giannis.’ Not only did Giannis keep the book, he’s using it. He’s still telling the jokes!”