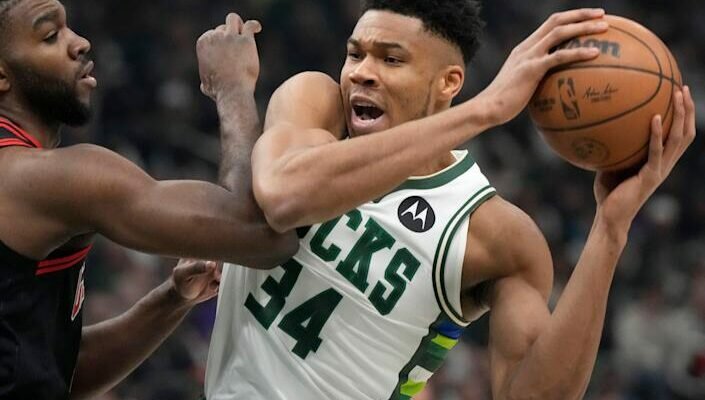 Milwaukee Bucks of America sensation, Giannis Adetokunbo (Antetokounmpo) justified his latest nomination for the most valuable player award in USA’s National Basketball Association (NBA) league with another stunning show for his side.

Megasportsarena.com reports that the Nigerian-born Greece international was again in sensational form for the NBA’s defending champions, just hours after he was named alongside two of his biggest rivals in the running for tihs season’s MVP gong.

While ‘The Greek Freak’ was fiery as ever, Fiserv Forum had a different energy before Game 1 on Sunday night against Chicago Bulls. There were white “Built for This” towels draped over every seat and a palpable playoff buzz in the arena that felt edgier than the 41 regular-season games.

The Bucks also started like they were keyed up on adrenaline and the crowd responded at eardrum-puncturing levels. But all that energy soon dissipated and Milwaukee had to fight for a 93-86 victory in a slugfest that came down to the final minutes.

Milwaukee had dropped five of their last six Game 1s in the playoffs, winning only last season’s playoff opener against the Miami Heat in a series that ended in a sweep.

Giannis, a two-time MVP, , who is in the running for this season’s prize along with Joel Embiid and Nikola Jokic, had 27 points and 16 rebounds, but could not score in the fourth quarter due mostly to foul trouble.

Brook Lopez added 18 points and Jrue Holiday 15, with both hitting key baskets down the stretch.

Milwaukee was able to win despite 21 turnovers, including seven from Khris Middleton, as The Bucks ripped off the first nine points of the game.

When Antetokounmpo dribbled into a three-pointer top of the key, Chicago coach, Billy Donovan called a timeout just 1 minutes, 33 seconds into the action.

Milwaukee’s lead in the first quarter ballooned to 32-16 when Bobby Portis drained a three-pointer and the Fiserv fans were at playoff-level volume.

The Bucks shot 14 for 26 (53.6%) in the first quarter and the game had all the makings of a blowout, but then the ball started clanging off the rim.

Bucks’ coach, Mike Budenholzer said afterwards: “Sometimes you got to win ugly. It’s not always going to be pretty or perfect.

“So to win a game that’s a little bit ugly and when we’re not our best, I think Chicago has a lot to do with that.”