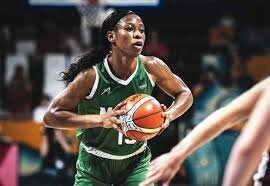 Nigeria’s women basketball national team, D’Tigress’ captain, Evelyn Akhator has cast her mind back to the early days of her career and recounted that she passed through a lot of torrid times before eventually getting the breakthrough, megasportsarena.com reports.

Although she admits she was ht with another disappointment when the Toyo 2020 Olympics, in which she had been hoping to lead D’Tigress to glory, was postponed from this year till next due to the delays caused by coronavirus, Akhator noted that she has faced much tougher times.

The Flammes Carolo of France star, who has also previously played for Dallas Wings of USA, Dynamo Novosibirsk of Russia, Besiktas of Turkey and CB Avenida of Span, recounted how she lost her mother at an early age in a car accident, among other personal setbacks in her life, but declared how determined she aims to keep getting good tidings out of every tough situation.

Born February 3, 1995 Flammes Carolo forward-cum-center was drafted by Dallas Wings of USA Women’s National Basketball Association (WNBA) as the third overall pick in the 2017 pool, then went on to play 15 games in her rookie season.

While turning out regularly for the Dallas-based side, she averaged 0.9 points, 0.2 blocks and 0.1 steal per game, but was waived by The Wings on May 13, 2018, after which Akhator signed with WBC Dynamo Novosibirsk in 2017.

Akhator also averaged 15 points and 11 rebounds in the Euro Cup, in which she played more than 30 minutes per game in the continental competition, only to leave soon after, as she signed with CB Avenida on May 15, 2019.

On February 13, 2019, Akhator returned to the WNBA by signing for Chicago Sky on a training camp deal but was soon on the move again, November 2019, as she signed with Flammes Carolo and further boosted her leadership credentials with D’Tigress, for which she made her first appearance en route to winning the 2017 FIBA Afrobasket Championship in Mali.

She averaged 15.3 points and 9.5 rebounds per game during the tournament and was named in the top-five all-stars’ list, after which she also excelled at the 2018 FIBA Women’s Basketball World Cup, where she went on to average 12.6 points, 9 rebounds and 1.4 assists.

That paved way for her top placement at the 2018 Nigerian Sports Awards, where she won the gong for Best Sport Woman of The Year and another for Best Basketball Player, which added to the long line of consolations the lass from a family of three, whose father and her older sibling reside in Nigeria while her mother Benedicta, died in a road accident.

The Nigerian captain has now taken a look back at her days growing up and making waves in the game of giants, as she took to social media with a philosophical conclusion that she has seen a lot of wear and tear that do bring for her memories of the rough road she has passed through.

Akhator stated: “Every scar on my body has its own memory; memories that reminds me of my childhood: the happy moments, the sad and dark moments that has its positive sides. It may not be pretty but that’s what makes me who I am today.”