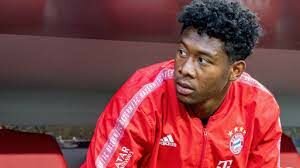 Bayern Munich of Germany defender, David Olatokunbo Alaba is edging closer to an exit from the Bundesliga champions this summer, as he has just a year left on his current deal at Allianz Arena and The Bavarians would prefer selling him now than lose him for free next year, megasportsarena.com reports.

So soon after Bayern won an eighth straight league title with their latest victory on Wednesday, startling reports emerged that all focus now is on how to line Alaba up for a deal this summer, in order for some amount of money to be procured from his expected exit in the summer.

Details of the report by The Telegraph revealed that Bayern will sell the Nigerian-born Austria international rather than lose him as a free agent next season, even as speculation is spreading that Chelsea of England are back in the race for the renowned left-back, who is also drawing keen attention from Paris-Saint Germaine of France.

The report adds that PSG have an interest in the 27-year-old defender, while Chelsea are also on the hunt for a left-back this summer, thereby suggesting a deal eventually emerging for Alaba, who has been with Bayern since 2008, during which time he made over 350 appearances for the club that has fast-rising Nigerian-born youngster, Joshua Orobosa Zirkzee in their current squad.

Additional reports at the start of this week also disclosed that Liverpool and Chelsea are reportedly contemplating whether to involve themselves in the race to sign Alaba, who has been entwined in repeated transfer deliberations for the better part of two years.