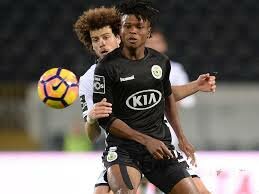 Vitoria Guimarães of Portugal midfielder, Mikel Ndubuisi Agu has set his mind of putting up an excellent performance this weekend, as his side go for their first match of the new campaign in the Primeira Liga against Belenenses, megasportsarena.com reports.

While conceding that he hopes to stay fit in order to have a better campaign than he had last season, the former FC Porto of Portugal battler stressed that he is already thinking of having a spectacular outing, because he always wants to do better in the next game than he had in the previous one.

The 27-year-old Agu, who has received a real to the Super Eagles for next month’s friendlies against Cote d’Ivoire and Tunisia, had indeed a season to remember last time out, when he braved a string of injuries to hit top form for his club in both the domestic Liga and UEFA Europa League, such that many commendations and rave reviews followed him from beginning to end.

He turned out to be one of his side’s best performers all season long, but they narrowly missed out on qualifying for the European slots, after finishing sixth on the final table, but Agu says he has pout all that behind him and he is now determined to consolidate on those gains.

The record books show that Agu was top-notch for Guimarães in 16 league games, averaging 84% accurate passes per game, an average of two interceptions, three key tackles per game and won an average of six duels during each match, but he has now promised to do more for his side this season and ensure that he gets even better marks; starting with Friday’s opening game.

Agu submitted: “The new season starts this weekend and we have a home game against Belenenses this Friday. Hopefully, we can pick up the maximum points and begin a long marathon journey.

“Personally, the goal is to always do better than my last game, so I want to take every game as it comes and constantly improves on it and keep helping the team in every way I can because we are very much determined to do better than the last campaign.”