Aniekeme Okon To Don Flying Eagles’ No.10 Jersey At Poland 2019 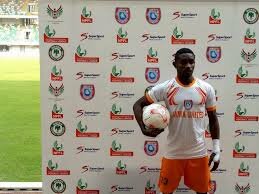 Akwa United of Uyo midfielder, Aniekeme Asuquo Okon has surprisingly got the nod to wear Nigeria’s number 10 jersey when the youth national team, Flying Eagles go out for glory at this year’s FIFA U-20 World Cup.

Against all forecasts that one of the foreign-based players, especially either of Tom Dele-Bashiru from Manchester City or Nnamdi Ofoborh of Bournemouth, would get the iconic number, Okon is the one to watch when action begins next weekend in Poland.

While Dele-Bashiru will don number eight and Ofoborh will line out with 13 on his jersey, all eyes will be on Okon to make hay in a figure that has been made popular by legendary players the world over, starting with Brazilian icon, King Pele, as well as Nigeria’s Austin ‘Jay Jay’ Okocha.

Megasportsarena.com reports that Okon will get the chance to don the number for the first time with the Flying Eagles on Friday, as Paul Aigbogun lines his wards out for their last build-up match, which will be against German Budesliga club, RB Leipzig.

However, lovers of the team would take them mind back to December, when Okon (born May 8, 1999) first made hay in the green-and-white, while shining for Aigbogun’s squad at the West African Football Union (WAFU) U-20 Cup of Nations in Togo.

Although Maxwell Effiom was named man of the match in their decisive game against Ghana, to reach the knockout of stage of the regional event, Okon was also outstanding after he was moved into midfield, in spite of initially being known to be deployed down the wings.

Former Akwa United coach, Abdul Maikaba, who is now an assistant in the Flying Eagles’ technical crew, said back then: “Aniekeme Asuquo is a young boy with a big heart.

“Immediately I spotted him play for Akwa Starlets last season, I told my chairman that we must do everything to have him.

“In fact, I watched all his matches last season with Akwa Starlets in the NNL. You could see his wonderful performance.

“I can say he is going to be a key player for us. All he needs to do is to stay focused and disciplined and his future will be bright.”