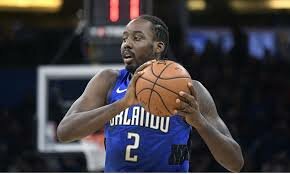 Orlando Magic of USA basketball club power forward, Al-Farouq Aminu is aiming for more glory with Nigeria’s men’s senor national team, D’Tigers, even as he admits he s already very excited to have been able to make history with the squad in Africa and the world, megasportsarena.com reports.

Having been part of the team that won two African title, played at the FIBA World Cup and only recently quaffed for the Olympics, Aminu believes he has achieved a lot with D’Tigers, but says he and his colleague will not stop working hard in order to create more history for Nigeria.

Even with the Tokyo Olympics now postponed till next year, Aminu assured that all the Nigerian players and their coaches in D’Tigers will continue setting their eyes on how to do well when the Games finally hold n July 2021.

He acknowledged that D’Tigers have continue to make Nigeria proud, even as he cherished the presence of many foreign-based players n the team and the recent appointment of a coach from the NBA for the squad, which he believes should bring in better quality and expert tactics that should make them stand out on any competitive level.

After becoming the first team from Africa to qualify for the Tokyo Olympics, after winning the Afrobasket Championship, Aminu added during Mega Sports on Star 101.5 FM, Lagos that he hopes to see more players of Nigerian origin born in United States of America play for D’Tigers.

The 29-year-old Amnu, who earlier featured for Nigeria at London 2012 Olympics and was part of D’Tigers’ 2015 AfroBasket title conquest, added that he was excited with their efforts at the 2019 FIBA Basketball World Cup in China, especially as he helped the country qualify for a third straight appearance at the Olympiad.

The creative player, who was born in Atlanta Georgia, USA, added that he and his teammates can do more by helping to bring more quality youth players into the national team program; while also admitting he is full of pride to have played a role in bringing a winning culture to D’Tigers, who finished as the highest placed African team at the 2019 World Cup in China.

He is also relishing the fact that high-profile players like Jahlil Okafor have expressed desire to play for Nigeria at the Olympics, while the recent announcement of an assistant coach at Golden State Warriors, Mike Brown as D’Tigers’ new handler is a sign that Nigeria Basketball Federation (NBBF) is moving in the right direction.

Aminu told fiba.basketball: “I’m super excited with the credibility Brown brings. Obviously he’s coached at the highest level. He’s going to bring a lot of work ethic and experience to our game and it’s also going to be good for our young guys, too, guys that play overseas

“There are some other things we can do for our youth teams. A lot of our guys played for the US youth teams, but I want them to see this as an opportunity as well, to be proud to play for the national team. I feel really honored to have been a part of it.

“I remember one of my friends saying to me: Thank you for what you did; you played for the national team in the prime of your career; some guys played when they were almost out of the league, or out of the league.

“I’ve given quality years to the national team. I’ve also had a purpose. My goal was obviously to win but with the situations we had, it would be tough to win medal the way we wanted to, and while that’s what we try to do every time, sometimes you have to be realistic.

“I shifted one of my main goals to wanting Nigerian basketball to be held in a good light for a longer time, to having that longevity, and I’m really proud of that. I feel like that goal is being accomplished. In history we are making and we would continue to make.

”It’s amazing, since I have been on the team we have been creating history non-stop, first time we got to the Olympics, we did again first time, we won the Afro basketball for Nigeria, it’s a kind of an amazing thing, I hope everyone in Nigeria understands the kind of amazing thing these team is doing.”