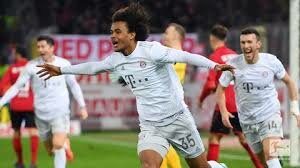 Bayern Munich of Germany youngster, Joshua Orobosa Zirkzee is heaping praises on the club’s coach, Hansi Flick for helping him build confidence in himself and for giving him the zeal to aim for regular game time with the squad, for which he scored last weekend, megasportsarena.com reports.

Although Zirkzee failed to add to his haul of four goals so far in his first full senior season with the German Bundesliga champions on Tuesday, the 19-year-old Nigerian-born lad is celebrating being part of their title-winning squad in his maiden season with The Bavarians’ first team, even as he thanked Flick for making it possible.

He was an unused substitute on Tuesday evening in Bayern’s 1-0 win over Werder Bremen that helped them clinch an eighth consecutive Bundesliga title, but it is joy all the way for Zirkzee, whose four goals this season came in eight matches, the latest of which was against Borussia Mönchengladbach on Saturday, and the lad says he is happy being a champion for the first time.

The youngster attributed his development to Flick, who took over the club’s coaching reins from Niko Kovac in November, and Zirkzee is now aiming at further cementing his place in the squad heading into next season, as he declared that he is not thinking about leaving on loan despite the limited playing opportunities he has gained behind the club’s array of superstars.

Zirkzee, whose current contract runs until end of the 2022/23 season, told Bild: “I haven’t played my best games, but since Hansi Flick has taken the helm, he has given me the opportunity and confidence. At the moment I am not thinking about a loan business, I try to develop myself further in training and make the best of the minutes I get. After that we will see further.”