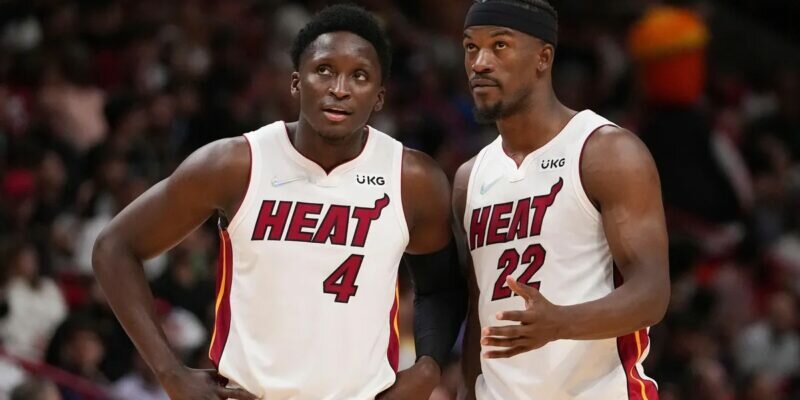 Miami Heat of America’s Nigerian-born duo, Victor Oladipo and Bam Adebayo were both in top form and helped their side romp to a 114-109 win over Toronto Raptors in USA’s National Basketball Association (NBA).

Megasportsarena.com gathered that Kyle Lowry had 16 points and 10 assists against his former team, Max Strus scored all of his 23 points in the second half, as The Heat scorched their foes from Toronto.

The former champions stood no chance, as Oladipo scored 21 points, Tyler Herro had 18 and Adebayo 16, as The Heat won their fourth straight and remained two games ahead of Boston atop the Eastern Conference standings. Each team has three games remaining.

Fred VanVleet and Pascal Siakam each scored 29 points, and Scottie Barnes and Gary Trent Jr. both had 19 as Toronto lost for the first time in six games.

Oshae Brissett scored 20 points and had nine rebounds to lead The Pacers, who have lost seven straight games, while Tyrese Haliburton flirted with a triple-double with 19 points, a career high-tying 17 assists and nine rebounds.

He became the first player in Pacers history to record at least 17 assists without a turnover and first to do it in the NBA since LeBron James on March 21, 2018.

Toppin and Alec Burks scored 12 points each in a 37-point third quarter for the Knicks, who made 12 of their first 13 shots in the period.

Burks finished with 19 points and seven rebounds, and Immanuel Quickley had his first triple-double (20 points, 10 rebounds, 10 assists) in 34 minutes off the bench.

Eguavoen Hopes To Coach Super Eagles In The Future