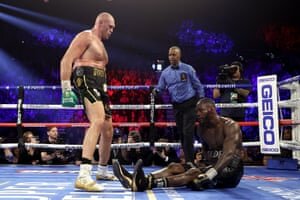 Tyson Fury completed one of the greatest comebacks in modern sports history on Saturday night when he knocked out Deontay Wilder in the seventh round to add the WBC’s version of the world heavyweight championship to his own lineal claim to the title, delivering the definitive outcome their first encounter failed to produce.

The Gypsy King, whose career appeared finished when he left the sport for more than two years amid public battles with addiction and mental illness, made good on his promise to press for a knockout in the hotly anticipated rematch against a man regarded as boxing’s most dangerous puncher.

As promised, he came forward from the opening bell, dropped the champion for the first time in a decade with a right hand to the temple in the third round, then again with a clubbing left to the body in the fifth.

By the sixth, Wilder was bleeding from his left ear, his legs were gone and he appeared unable to adequately defend himself as Fury relentlessly picked him apart.

When referee Kenny Bayless waved it off at the 1:39 mark of the seventh after the champion’s corner threw in the towel, it set off scenes of pandemonium among the sold-out crowd of 15,816 at the MGM Grand Garden Arena.