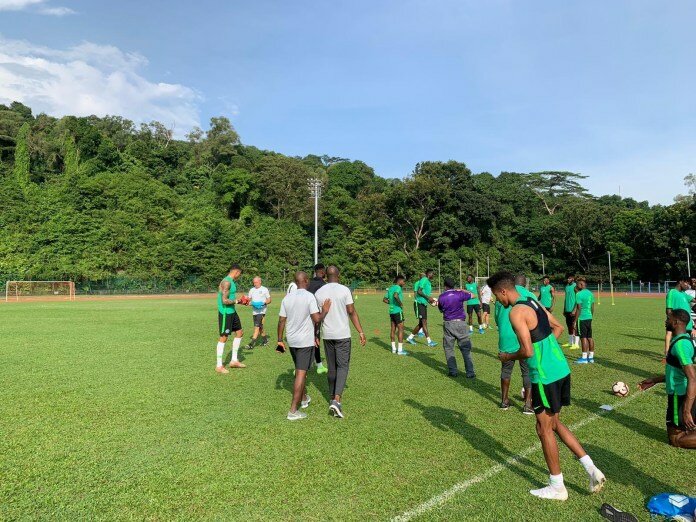 Benfica of Portugal full-back, Tyronne Ebuehi has put himself in line for a starting shirt against Brazil, following his spirited start to training on his return to the Super Eagles, after last playing for the team at Russia 2018 World Cup, megasportsarena.com reports.

A career-threatening injury not only kept him out of the Eagles since then, it also stopped him from having his competitive debut with Benfica for over a year, following his arrival from ADO Den Haag of Holland in the summer of 2018, but he has obviously put it all behind him.

Such it was that the Holland-born versatile defender was the cynosure of all eyes in his first training session back with the Eagles, as he puts himself in the right frame to make the best of the absence of AS Torino of Italy star, Ola Aina from Sunday’s game against Brazil.

Megasportsarena.com gathered that Ebuehi showed he is fully back to his best with a near faultless display during Friday’s training session, as he made the best of the opportunity he got being called up as a replacement for Leganes of Spain’s injured stopper, Kenneth Omeruo.

Ebuehi proved his fitness level to a large extent, as completed all of the physical drills prior to the start of training proper, during which he was heavily involved in shooting practice, ball work and a practice match to round off the session.

His performance will no doubt brighten his chances of playing some minutes against Brazil this Sunday at Singapore National Stadium, as he can also line out on the left side of defence, while Bursaspor of Turkey full back, Shehu Abdullahi appears to be the favorite to start as right-back.

Another returnee, Ramon Azeez was also in good form, alongside the two fresh invitees, Peter Olayinka and Efosa Viv Solomon-Otabor, as they all looked good in training and pushing for game time on Sunday.

Azeez, who is staging a comeback after a five-year absence, was the most lively of the lot, as he replicated his current form at Granada of Spain that earned him a recall, with his energy quite high on and off the ball.

Azeez looks the most likely to get some game time, not just because of Oghenekaro Etebo’s absence, but also do to his work rate, as he showed efforts, zeal and great positional awareness, while Olayinka can also be confident of getting his debut with some game time if he continue the way he did in Friday’s session.

Olayinka scored with a well hit drive past home-based goalkeeper, Ikechukwu Ezenwa during the session and, aside from his liveliness when in possession of the ball, he looked very fit and strong in duels particularly when it comes to taking goal scoring positions.

Solomon-Otabor also caught attention with his pace and ability to track back and defend, but his final ball and crosses were wayward, while his confidence looked shaky when through on goal.