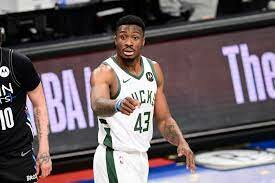 However, megasportsarena.com reports, it was just not enough to give them a much-desired win in the absence of his more famous younger brother, Giannis Adetokunbo (Antetokounmpo).

With Thiannis taking over the show on a night Giannis was ruled out with injury, The Bucks ambled to a disappointing performance en route to a shock loss away to Minnesota Timberwolves.

Without their marque star on the court, The Bucks took a turnaround from their recent momentum coming out of the all-star break, winning six of eight and toppling several of top-seeds in the Eastern and Western Conferences.

They ran into a hotter team Saturday afternoon at Target Center, as The Timberwolves had surged up the standings with the league’s top-scoring offense, and Bucks were without most valuable player candidate.

Without their star, Bucks couldn’t keep pace with the streaking Timberwolves and suffered a 138-119 loss. Minnesota is 11-2 since the all-star break.

“They’re athletic, they’re active, they’re fighting for the play-in tournament, positioning, things like that. Obviously without Giannis, it changes our dynamic.

“I think that might be the first time, obviously this year, Brook (Lopez) and Bobby (Portis) have started together.

“So, it’s a different way we play. But we’re always confident when we go out there.

“It didn’t go the way we wanted to. I thought we could’ve been a little more active, made them a little more uncomfortable on the three-point line.

“They definitely hit some tough ones as well. It’s something that regardless of who’s out there we think we have enough guys to win the game.”

Antetokounmpo was ruled out with right knee soreness and missed a game for the first time since February 14.

The Bucks had been off for two days after winning away to Sacramento Kings on Wednesday.

Just about 90 seconds into the game against Kings, the 27-year-old appeared to tweak his knee as Portis scored, yet Antetokounmpo winced and flexed it out.

He once again reacted to the knee when he was called for an offensive foul a few minutes after that, but Antetokounmpo played about 35 minutes and scored 36 points.

The Bucks’ coach, Mike Budenholzer said before the game: “We are kind of always kind of managing his knees and his health.

“I think he did get banged maybe in that game and the one before, both.

“So, I think, it’s just part of the NBA season and schedule. We hope it’s short term. We’ll see how he responds the next day or two.”

Saturday marked the 12th game Antetokounmpo had missed, and Milwaukee fell to 5-7 without him and 44-27 overall, while Minnesota (42-30) won their fourth straight.

The playmaking weight naturally falls to Khris Middleton and Jrue Holiday when Antetokounmpo misses time and that bore out, with each taking 13 shots before sitting after the third quarter.

Lopez rejoined the starting lineup for the first time since opening night and played 20 minutes in his third game since returning from back surgery.

He scored 15 points on 6-of-10 shooting, including all 11 points for the team in the opening 3½ minutes of the third quarter.

On the other end of the court, Antetokounmpo’s absence and Lopez’s restricted minutes opened things up for Minnesota all-star Karl-Anthony Towns.

The 6-foot-11-inch center scored 25 points on 6-of-12 shooting. He had been averaging over 27 points per game since the all-star break, including a 60-point outburst Monday in San Antonio.

Dynamic shooting guard Anthony Edwards scored 25 for the Timberwolves, and he and Towns were joined by D’Angelo Russell (16), Naz Reid (14) and Taurean Prince (14) in double figures.

In the decisive third quarter the Timberwolves went 6-for-9 from behind the three-point line to double up their halftime lead and take a 106-82 lead into the fourth quarter.

Despite Lopez’s best efforts to get the Bucks into the game in the early going, Timberwolves made 6 threes in the opening five minutes of the quarter.

The defending champions couldn’t keep pace, as Edwards made 3 threes in that stretch as they took a 90-69 lead at the 7:15 mark.

Budenholzer said: “For Brook to get up to 20 minutes, that was his next kind of hurdle. Then I thought his activity rolling to the basket, his finishing, his catching.

“The lob with he and Jrue that was very high level for him to have the ability to go up and catch it or control-tip it. So, I thought some really good things.”

The Bucks never really challenged after that, though they cut it to 98-82 after triples from Serge Ibaka and Wesley Matthews, but Timberwolves ended the quarter with eight straight points to effectively end the game as Budenholzer pulled his starters to open the fourth quarter.

Lopez returned for a few more minutes but the day was over for Middleton, Holiday, Allen and Bobby Portis.

Allen finished with 13 points and Portis had 10 rebounds but scored four points on 2 of 10 shooting.

Minnesota’s coach, Chris Finch did play his starters for the bulk of the fourth quarter, but the teams essentially traded baskets throughout, as The Timberwolves pulled their main group with 3:36 to go.

The Bucks struggled to defend without fouling when the starters were in the game, and The Timberwolves went 22-for-26 from the free throw line while the Bucks were 14-for-17.

The third quarter three-point barrage also helped the Timberwolves make 22 threes, as they shot 46.8% from beyond the arc. The Bucks were 19-for-52 (36.5%) from behind the three-point line.

“I think tonight Minnesota’s activity defensively, their ability to kind of be disruptive and create turnovers, I think you’ve got to give those guys some credit,” Budenholzer said.

“It’s impressive. We’ve gotta be stronger with the ball, take care of it better. I think that and the offensive boards kind of stood out to me. And they’re good.

“They’ve got a good thing going right now, they’re in a good rhythm. But the turnovers were a big part of them kind of allowing them to get separation from us.”

Black Stars To Storm Kumasi On Tuesday, Ahead Of Play-off With Nigeria