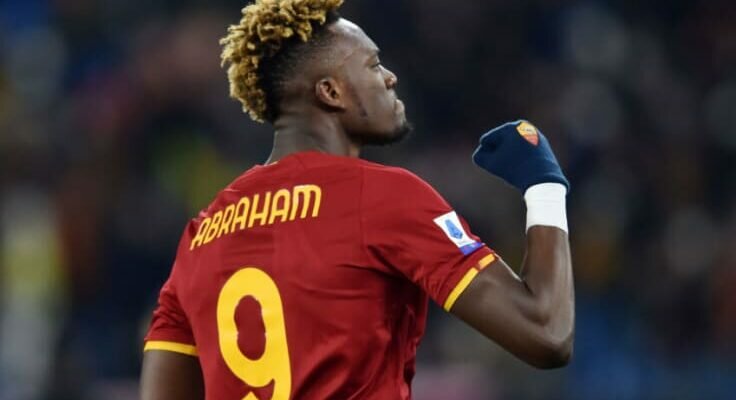 Roma striker Tammy Abraham is said to be happy in Italy, despite reported interest from Manchester United and Arsenal.

The England international finished his first season in the Italian capital with 27 goals, 17 of them coming in Serie A. Just three players – Ciro Immobile, Dusan Vlahovic and Lautaro Martinez – bettered the former Chelsea frontman in the league.

Interest in the 24-year-old might seem unsurprising considering his goalscoring exploits. However, manager Jose Mourinho is keen to keep the striker around, again hardly a surprise such has been the ex-Chelsea forward’s success during his debut campaign.

Yet, there is still the contract clause, installed when the former Aston Villa loanee arrived from Chelsea, that hands his former club first refusal. In the summer of 2023, the Blues will be able to bring Abraham back to Stamford Bridge with a bid of €80m (£69m) – double the amount they received for the England frontman.

Abraham was Chelsea’s top goalscorer in his first full season in the Blues’ first-team, scoring 15 times in the Premier League in 2019-20. However, after falling out of favour under Thomas Tuchel, he joined Roma on a five-year deal last summer.

In addition to his 17 Serie A goals, Abraham found the net nine times in the Europa Conference League.

Feyenoord and Nigeria forward Cyriel Dessers was the only man to score more, and it was Abraham who came out on top in the final thanks to Nicolo Zaniolo’s winner for Roma in Tirana.