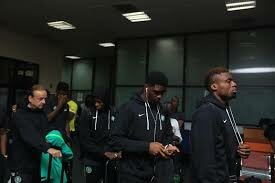 Nigeria’s first match in the Qatar 2022 qualifiers will hold on date set to be fixed in March 2020, as the Super Eagles will then begin their task of scaling through the group stage in the African series, megasportsarena.com gathered.

This time, though, the Eagles will have am longer route to follow in order to get to Qatar in November 2022, as the African qualification competition has been expanded to include a final knock-out stage after the group games, which will make the contest more intriguing.

It means Nigeria Football Federation (NFF) have to hasten up in reaching a resolution over the saga of a contract extension or exit for Eagles’ current handler, Gernot Rohr, as the officials are currently held in a stalemate of sort over the Franco-German gaffer’s future on the job.

With Rohr haven become outspoken of recent, especially with complaints over money he is being owed and pressure on him to invite home-based players to the squad, the NFF are in dilemma over keeping him beyond the expiration of his contract next June, but they will have to pay him off with $1m should they decide to sack him before then.

However, a decision has to be taken very quickly, as the Eagles will have to play a match or two in their build-up to the start of the Qatar 2020 qualifiers, of which they will get to know their group opponents on January 21, when the draw holds at Ritz Carlton hotel in Cairo, Egypt.

The ceremony will see the 14 winners of the first round qualifiers join the 26 top-seeded teams to form ten groups of four contestants each, based on the December 2019 FIFA World Rankings, with the ten group winners then advancing to the final round.

The African qualifiers will kick off in March 2020 and will conclude in October 2021 after which the final knock-out round, which is scheduled for November 2021, will see ten group winners all paired for home and away games, from which the five winners get tickets to Qatar 2022.

A preview by fifa.com read in part: “African qualifiers traditionally provide plenty of surprises and memorable matches. Four of the five African teams at Germany 2006 were debutants at the global finals, including Angola and Togo, who enter the fray for Qatar 2022 with challenging encounters in the opening qualifying round against Gambia and Comoros.

“Thirteen African nations have reached the FIFA World Cup in the competition’s history, with Brazil 2014 marking the first time that two countries from the continent had advanced to the knockout stage in the same edition.”