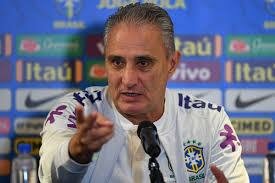 Samba Boys of Brazil’s coach, Tite has confessed that the biggest ploys he will be wary of from Nigeria’s Super Eagles is the likely speed, compact play, physical contact and dangerous aerial balls his players are bound to come up against from the West Africans, who he believes will be another tough nut to crack, megasportsarena.com reports.

Tite admitted his side found it pretty difficult in Thursday’s similar game against Senegal, which ended 1-1 at Singapore National Stadium, such that the tactician is now apprehensive of a repeat of those tactics by the Eagles on Sunday, hence his verdict that his players will have to work even harder to get victory in their second game on their tour of the tiny Asian island nation.

The Samba Boys also struggled to beat Cameroon 1-0 last November and looked off the pace in the draw with Senegal on Thursday, causing the gaffer to warn his players to raise their game when they face the Eagles in their next international friendly on Sunday.

Since winning Copa America in July 2019, Tite’s side have not won any of their last three games and suffered a defeat at the feet of South American rivals, Peru in a friendly last month, such that the former Corinthians and Internacional manager urged his players to put in more commitment against Nigeria than they showed in Thursday’s draw with Senegal.

Against Senegal, Liverpool striker, Roberto Firmino opened scoring in the ninth minute, but Famara Diedhiou scored from the spot to equalise for The Teranga Lions after another Reds’ player, Sadio Mane won a penalty just before half-time.

Tite admitted Brazil played below expectations on Thursday, and noted that they found it hard to beat Cameroon in a friendly last November, but the coach also acknowledged that the five-time FIFA World Cup champions always struggle African teams, who are stronger and more physical.

”They are teams that seek contact, bring compaction, strong aerial ball. And we are still finding the best way to play against the African teams.

”You have to raise the competitive level. For the African team the friendly has an importance and for us it must have.”