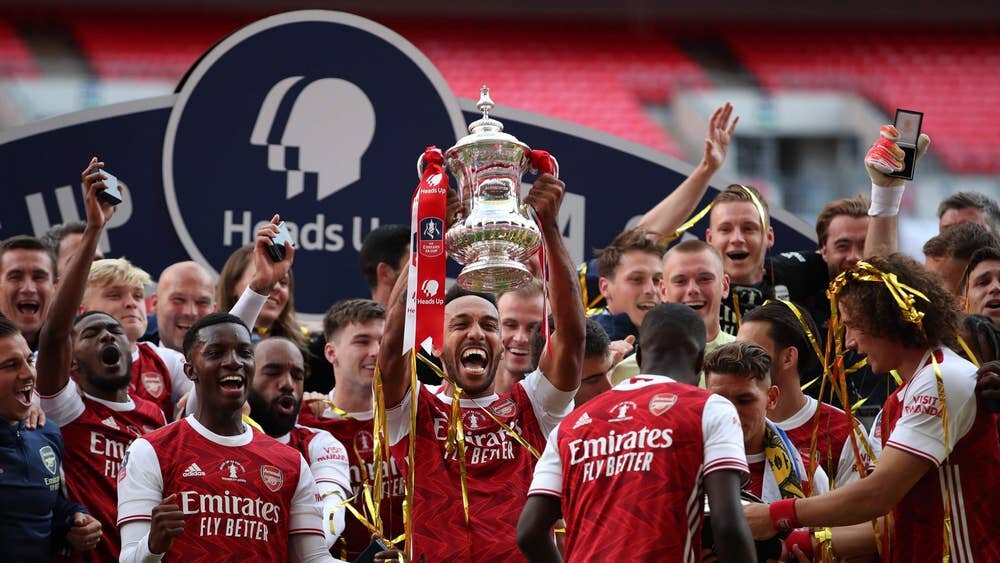 Arsenal of England youngster, Bukayo Saka sat out on The Gunners’ bench for all 90 minutes of Saturday’s English FA Cup final against Chelsea, but ended the evening with satisfaction, as his side carried the day with a 2-1 win at Wembley Stadium, megasportsarena.com reports.

While Saka failed to get a single second of action in the London Derby, Chelsea’s Nigerian-born duo of Tammy Abraham and Ross Barkley both got off The Blues’ bench in the 78th minute, in a triple substitution that also saw Callum Hudson-Odoi enter the fray at the same moment with the duo; but they could not save the day for the side that scored first, less than five minutes into the game.

Barkley got an 89th minute yellow card, while Chelsea’s third Nigerian-born player, Fikayo Tomori sat out the entire duration of the game, in which Pierre-Emerick Aubameyang scored twice to help The Gunners win the FA Cup for a record 14th time.

Chelsea took the lead after five minutes thanks to a brilliantly-taken strike from Christian Pulisic – who became the first American player to score in an FA Cup final – but Arsenal equalised shortly before the half hour as captain Aubameyang won and then perfectly converted his 28th goal of the season from the penalty spot.

Aubameyang and Mason Mount registered early efforts in a lively start at Wembley, which culminated in Chelsea taking the lead with just five minutes on the clock, as former Gunners’ striker, Olivier Giroud’s clever flick released Pulisic into the box, where the American skipped past Kieran Tierney before slotting his 11th goal of the season past Emiliano Martinez.

Chelsea lost their captain, Cesar Azpilicueta and Pulisic to hamstring injuries either side of the interval and fell behind on 67 minutes when Aubameyang lifted a stunning second over Willy Caballero.

The loss of Azpilicueta to a serious-looking hamstring injury confirmed a torrid couple of minutes for Chelsea, who were under the cosh and thankful to reach the break level having lost all of their early momentum.

The Chelsea skipper had earlier been issued a yellow card by the match referee, Anthony Taylor, whose decision to point to the spot was upheld by VAR, and Aubameyang clinically dispatched his fourth goal in two FA Cup appearances this season from 12 yards.

Chelsea hopes were extinguished six minutes later when Mateo Kovacic was sent off for a second bookable offence, as Arsenal used their numerical advantage to secure the first trophy of Mikel Arteta’s tenure and a place in next season’s Europa League.

Kovacic’s second yellow for a foul on Granit Xhaka and subsequent dismissal effectively ended Chelsea’s hopes of overturning Arsenal’s lead, and a late shoulder injury to Pedro in his final game for the Blues was the final act of Chelsea’s capitulation as the cup slipped out of their hands.

Chelsea remained in the ascendancy as Arsenal took their time to grow, but the Gunners looked to have introduced themselves in spectacular fashion when Nicolas Pepe’s curled strike nestled in the top corner.

The Arsenal celebrations were short-lived though, with Aubameyang caught offside in the build-up, but seconds later the Gunners captain raced onto a ball over the Chelsea defence before being hauled to ground by Azpilicueta.

Chelsea weathered the loss of Pulisic within seconds of the restart with a dominant spell as they looked to reassert their authority, but a moment of brilliance from Aubameyang fired the Gunners in front for the first time.

Hector Bellerin’s burst forward and a rash challenge from Andreas Christensen diverted the ball into the path of Pepe, his pass found Aubameyang and the Gunners skipper skipped past Kurt Zouma before chipping a sublime second over Caballero.

It means Arsenal have won the FA Cup for a record 14th time, while they’ve also become the first club to beat a specific opponent in as many as three finals in the competition; while The Gunners’ coach, Mikel Arteta has becomes the first person to both captain and manage the club to victory in an FA Cup final.

Arteta is also the first Arsenal manager to win a major trophy in their first season in charge of the club since George Graham in 1986-87 and his team have qualified for next season’s UEFA Europa League group stage.

Arsenal have won each of their last seven FA Cup final appearances since 2002 and no team has had a longer run of successive final triumphs in the competition, while Chelsea have lost three of their last 10 FA Cup final matches, with all three defeats coming against The Gunners.

The Gunners’ victory over Chelsea ensured their place in the Europa League next season and means their London rivals, Tottenham Hotspur, who finished sixth in the English Premier League, will have to go into the second qualifying round of the competition.

Spurs would have gone straight into the group stage if Chelsea had won, but it is worse off for Wolverhampton Wanderers, as victory for The Blues would have handed them a Europa League second qualifying round spot after finishing seventh in the EPL, but they will miss out on Europe because of Arsenal’s triumph – unless they win this season’s Europa League, in which they are still in the prolonged race.

Chelsea face Bayern Munich in the last-16 of the Champions League on August 8 at 8pm and both clubs will be back in EPL action next month, with the 2020/21 season kicking off September 12.