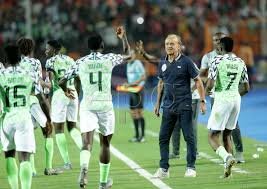 Super Eagles coach, Gernot Rohr has finally served up a strong hint that his squad have what it takes to become champions at the ongoing Africa Cup of Nations in Egypt, as he affirmed that the team has a strong depth of talent and all the players are mentally strong, megasportsarena.com reports.

Speaking against the backdrop of Wednesday’s enchanting 2-1 win over South Africa in the quarter-finals, the Franco-German tactician declared that the players’ ability to bring fresh ideas into play during the game and hold their focus even when Bafana Bafana fought back made a lot of difference in taking Nigeria to the semi-finals.

Rohr recounted the line of issues that led to his tactics, starting line-up and formation for Wednesday’s match, all of which he said was based on the need to put some variety into Nigeria’s approach, hence the decision to start Samuel Chukwueze and Jamilu Collins, while also detailing all his midfielders and defenders to avoid excessive attacking moves.

The former Niger Republic, Gabon and Burkina Faso handler said he is happy with the feat, which he admits has given him and his players more confidence, heading into their semi-finals’ fixture, and promised that they will not rest on their oars.

Making his points further during Mega Sports on Star 101.5 FM, Lagos, Rohr said he was also happy to see a lot of fair play exhibited in the match, especially at the end, when players on both sides went to share pleasantries, despite the grueling manner in which the game ended.

Indeed, it was until the 89th minute of play that William Troost-Ekong managed to nip in the winning goal, through a motley of legs, off Moses Simon’s corner kick, and Rohr added that the Udinese of Italy stopper also deserves praise for keeping his head and concentrating till the end.

Rohr expatiated: “We have played two games within four days, and I knew we needed fresh legs for this quarter-final match.

“We played three matches without starting a natural left-footer, which is not good, so I said we have to get Chukwueze and Collins into this one.

“South Africa played better, especially in the second half, but we were mentally strong. It’s happiness because we won it.

“I am happy to stay on in the competition. We will be in this wonderful country for another 10 days or so, which is also good.

“We were lucky that we scored that late goal from the corner. I am happy that we won and I hope we will get to the final.”