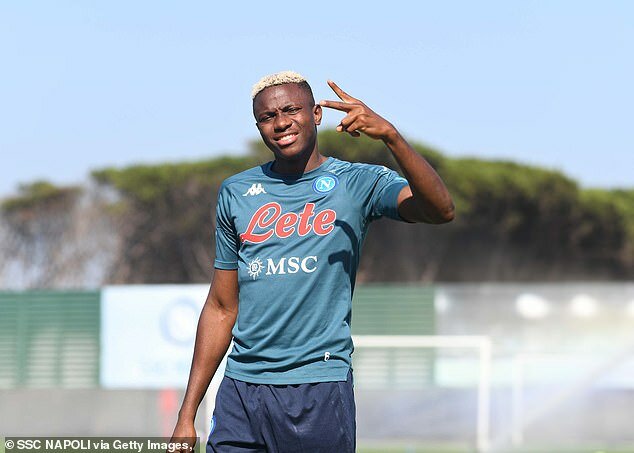 SSC Napoli of Italy striker, Victor Osimhen has received a huge morale booster ahead of his outing with the Super Eagles against Cape Verde on Tuesday, as his immediate past club, Lille Metropole of France have doused controversy over his transfer fee.

Megasportsarena.com reports that speculation had been rife about a likely ban for the Chile 2015 FIFA U-17 World Cup top scorer, when reports emerged that there were dirty dealings in the transfer that took him from Lille to Napoli last summer.

At a point, investigations were launched in both France and Italy, thereby suggesting that all was not clean among agents and officials that brokered the deal, which became the costliest for any African player ever.

However, Osimhen can now rest easy and concentrate of making hay for the Eagles against The Blue Sharks this Tuesday, following confirmation from Lille about the transfer fee from Stade Pierre-Mauroy to Naples in July 2020

Lille’s president, Olivier Letang gave Osimhen the massive boost on Monday, when he confirmed that Napoli actually paid €68m – not €81m  – for the former VfL Wolfsburg of Germany and Sporting Charleroi of Belgium hitman.

A report by goal.com added: “Letang who succeeded Gerard Lopez as Lille CEO last December, dismissed reports that the Ligue 1 champions collected €81m for the Nigeria international in July 2020.

“Osimhen joined Napoli on a five-year contract after his outstanding debut season in the French top-flight where he won the 2020 Prix Marc-Vivien Foe.

“Letang, in response to Lopez who claimed Osimhen was sold for €71.3m with €10m bonuses, explained that the valuation of the four players added in the deal by Napoli caused the confusion.

“The 48-year-old added that no agent was paid by Lille to complete Osimhen’s departure to the Stadio Diego Armando Maradona.”

Osimhen will also take delight in learning that the former Stade Rennes of France president has also dispelled suggestions that Napoli were underpaid in the deal, as he threw further light on what had all along been tagged a controversial inclusion of four other players in the package.

“Four players arrived from Naples. The valuation of these four players, in aggregate, is according to the specialized players a maximum of 500,000 euros.

“These four players were bought for twenty million euros. Not a single intermediary was paid. An agent was indeed appointed on July 27, 2020.

“The transfer contract was signed on July 27, 2020. This is also factual so we must stop lying and manipulating.”