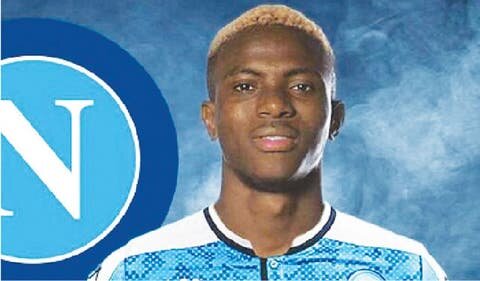 Napoli of Italy’s first signing of this summer, Victor Osimhen has been told in clear terms that he will have to quickly learn how to speak Italian language for him to be able to settle down fast with the club and justify his big money transfer that was sealed on Thursday, megasportsarena.com reports.

This charge is coming from the Naples-based Italian Serie A club’s all-time highest goals scorer, Dries Mertens, who pointed out that the language barrier could be a huge obstacle standing between Osimhen and a repeat of the heroics he displayed in just one season with Lille Metropole of France.

It was a similar scenario for him at his previous club, Sporting Charleroi of Belgium, where it also took a single season for Osimhen to explode, after spending four fruitless years wallowing in the youth team of VfL Wolfsburg of Germany, which he joined after top scoring at the 2015 FIFA U-17 World Cup in Chile.

As if to warn him to avoid a repeat of the blight he suffered during his early days at Wolfsburg, Osimhen has now received a wake-up charge from Napoli’s topmost scorer in history, but the Belgian ace with 125 goals for The Neapolitans also promised to help the new arrival settle down fast and adapt to all expectations in the Italian Serie A.

Mertens stated as much following confirmation of Osimhen’s African and Napoli record transfer fee, which is touted to rise in excess of 50 million euro for five years, running until at least June 30, 2025 at the first instance, and the Belgium international firmly declared that the 21-year-old product of Ultimate Strikers Academy of Lagos is warmly welcomed into the Partenopei’s fold.

Although repeated reports up till early this week insinuated that Osimhen would have preferred a move to the English Premier League and he had earlier expressed concern over series of racism issues in Italy, the Ishan native from Edo State has been assured by Mertens that he will not regret agreeing to join Napoli.

Incidentally, the agreement that takes Osimhen to Naples will see Lille receive a transfer fee of €50m from payable over five years, plus bonuses tied principally to the striker’s ability to help the Italian club progress in the UEFA Champions League, with varying figures based on how they move from the quarter-finals to possibly emerging as winners.

While a huge payday would be accruable to player and club should Osimhen be able to help Napoli all the way to the UCL trophy, he and Lille would be essentially eligible to a percentage of elevated prize earnings from their participation and progress in the elite clubs’ competition.

However, regardless of the UEFA conditional pay, Osimhen will earn a confirmed annual take-home package of around €4m after tax and bonuses; for which he has received a pledge of total support from Mertens to help him achieve, with the promise coming few weeks after the Nigerian lad also gained encouragement from Napoli’s Senegalese defender, Kalidou Koulibaly, who assured his fellow-African about safety in Italy.

As Osimhen now prepares to head into the team’s pre-season programme later in August, the lanky lad, who scored 18 goals and got six assists in 38 matches across all competitions for Lille, will bank on the warm words of welcome he has received from Mertens.

Mertens told Radio Kiss Kiss Napoli: “I want to help the team and the young people, that’s my future. I want to help Osimhen and Andrea Petagna. Not knowing the language and the championship, will need some time, we must all be close to him. It’s difficult to come from another country and settle in, we must help them fit in here. We can also play together.”