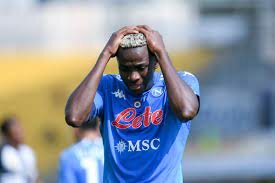 SSC Napoli of Italy striker, Victor Osimhen has been credited with a record number of misses in a single Italian Serie A match, following his haul of four thwarted efforts during Monday’s victory over AS Torino, megasportsarena.com reports.

Although the former VfL Wolfsburg of Germany, Sporting Charleroi of Belgium and Lille Metropole of France striker eventually scored in the game and took his haul of goals to seven so far during his first season in Italy, statistics showed that he could have had a triple brace instead.

However, brilliant saves by the opposing goalkeeper, gritty defending by Torino’s backline and a couple of overzealous efforts by Osimhen meant the Chile 2015 FIFA U-17 World Cup top scorer ended up netting only one of five chances he got during his side’s 2-0 away win.

Osimhen, who was replaced with ten minutes left on the clock, having been showed a yellow card earlier on, would take delight in his ability to score for two straight matches for the first time since his arrival as Napoli’s costliest transfer ever, but it would shock him to learn how much better the story could have been had he converted all the other chances he got.

The Super Eagles’ youngster, who now has four goals and one assist in his last six Serie A games, has now been credited with a season high record of four missed scoring chances during the game at Stadio Grande Torino.

Information provided by football statistics website, Whoscored added: “Of the six shots he attempted, four were on target with one ending up in the back of the net in the 13th minute.

“The brilliance of Salvatore Sirigu denied Osimhen from scoring on two occasions in the second half, with the Torino goalkeeper making unbelievable saves with his feet. In the first half, the Nigeria international missed a sitter when he fired a shot off a Torino defender.”